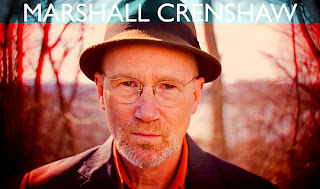 Here's one more look at the music of master power popster Marshall Crenshaw, from his more recent years. Following the lackluster response (once again) to his wonderful 1991 album, Life's Too Short, Marshall was again left without a recording contract (Life's Too Short would be his last major label release). But after a couple years signed with the small independent label, Razor & Tie. With them Marshall released a series of albums, including Miracle of Science (1996) and #447 (1999), as well as a couple Live albums (1994 & 2001), none of which received much media attention or public interest. I have to admit that, although I had bought all of Marshall's albums up through Life's Too Short, that I never even heard of or knew about these releases at the time. But Marshall kept on going making quality music throughout his career. Here is a show from 2000, where we can hear a definitely older, somewhat mellower, and probably wiser version of Marshall Crenshaw, but he still had the goods, and delivers a high quality show that features new songs from the #447 album as well as a mix of songs (and covers) from throughout his career.

Track 4, listed here and introduced by Marshall as "Anthemic Instrumental", is "AKA 'A Big Heavy Hot Dog'", later released on Marshall's 2003 album "What's in the Bag?".

his voice is pretty shot here