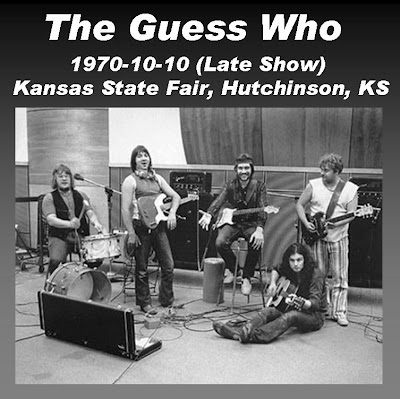 I just recently obtained this vintage 1970 show from The Guess Who (thanks to mdm3 at G101 Forum!), and it is a great show and performance, so I wanted to pass it along here, since there are very few shows available from this period from this great band. This  show features the band near their peak, at the end of their US Tour to support possibly their best album, and their first without Randy Bachman, Share The Land, and they prominently feature their TWO new ace guitarists, Kurt Winter and Greg Leskiw. Burton Cummings (my choice as the greatest rock vocalist ever) is in full force mode here, and in full charge of HIS band now. Unfortunately, like most of the available GW shows, it is NOT a high quality recording, it's not very good at all really (I rated it 'fair'), with very limited dynamic range (old, low quality cassette source), uneven sound, and the usual audience-taped problems. However, it is certainly no worse than most of the other available recordings from this period, and actually quite a bit better than many. Although not 'good' sounding, it is eminently listenable, is relatively 'clear'-sounding compared to many murky, muddy-sounding recordings. Anyway, the performance, however, is well worth the listen, as this show contains many highlights and marvels. First, it is a much longer, fuller show than the previously offered 1970 show (1970-8-26 - Wash.DC), with several additional songs included here, such as the rarely played 'We're Coming to Dinner', 'Do You Miss Me Darlin'', and 'Hang On To Your Life', as well as a totally unexpected dose of country twang with a cover of 'Close Up the Honky Tonks' (as immortalized by Gram Parsons' Flying Burrito Brothers). The band is in great spirits and puts on a great show. They do even longer, extended versions of 'Money Bag/Humpty's Blues' and 'American Woman' than was their norm. The resulting Jam off of American Woman is particularly notable for it's extended solos and the jams emanating from the insertion of 'Do Wah Diddy' into the festivities (obligatory keyboard, guitar, drum, vocal, and even flute solos are abundant here, the drum solo alone goes on for 7 minutes) which is different from any other live version I have heard previously, and lasts a full 27 minutes. All this in addition to classics like the combined 'No Sugar Tonight/New Mother Nature', 'No Time', 'These Eyes', 'Hand Me Down World', and 'Undun', make for a very memorable show, just be forewarned that it is not a good recording, but still very much worth your time.

BB, looks very awesome, but the link is broken. Can you fix? Thank you

Nice write-up on the Guess Who at the Kansas State Fair. You really love this stuff, don't you?

Only a true bootleg lover sees the value of a less-than-pristine recording.

The link is still broken. Can you fix? Thank you

I saw them weeks before in Allentown PA; hey were MASSIVE! PLEASE fix this link! THanks!

Link Fixed. Sorry about that. Good to see that at least there is some interest in this (it seems the only time I get many comments is when there is some problem with the link!?). Enjoy!

I am a huge Guess Who fan and I totally agree with you about Burton Cummings being one of the greatest singers ever. I saw the Guess Who twice in the early 70's and Cummings twice solo. I really appreciate these boots.

listening to this now. It is more than acceptable. thanks.

I stumbled across this on Youtube yesterday and listened to it all day. Said to myself..I've got to have this! Came to your Blog via TUBE or Dirty..don't remember for DMB. First visit. While searching today I saw you had it. Very Grateful. Thank you!

love the guess who posts, thank so much. i have a 1983 reunion rehearsal recording i want to pass to you as a thank you. i will email you. Ed ortfargyll@gmail.com

Top!
Thank you very much.

Thanks. I was there, don't know how I got there or back to Wichita but I remember most of the concert. I always thought maybe it was too much hash or just a dream.