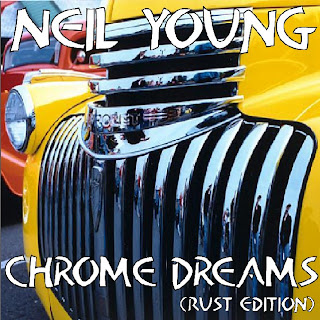 
As mentioned in the previous (5th Anniversary) post, as part of the commemoration of our 5 years, I will be featuring some of the all-time classic bootleg albums. These previously have been available on numerous different blogs (so were not previously featured here), but due to the demise of many of those blogs and the deletion of all the old megaupload, rapidshare, mediafire, etc. links, they may now be difficult to find or locate, so I will now feature some here.

As promised, first up is one of the greatest unreleased albums of all time, Neil Young's legendary album from 1977, Chrome Dreams. Of course, most serious fans already know all about this album and already have it, but for the newer fans, or those just learning to find these things on the internet, this is a must-have addition to your music collection. This would surely have been one of Neil's all-time best albums (if he would have released it at the time), but as it was, most of these songs would be slowly released in very to somewhat different forms over the next 20 years, instead of all together here in 1977. As for why it was not released at the time, well that's just Neil, he had already moved on to his next projects and just scrapped these versions. There have been several different versions of this collection over the years, but this is the definitive edition (Rust Edition). Here are a few excerpts from the liner notes of this excellent compilation to help explain better:
"Neil Young was on a creative high in 1975.  By the end of the Summer, Zuma was finished, though still not released, yet Neil carried on recording his new songs. Sometimes he recorded solo and sometimes with Crazy Horse.  Lots of these songs would remain unheard by the public until quite a while later, but by late '75 Neil had already written and recorded versions of such future classics as 'Like a Hurricane', 'Powderfinger', 'Sedan Delivery', 'Pocahontas' and 'Ride My Llama'. He carried on recording in 1976.  More great songs were put down on tape, such as 'Will To Love', 'Stringman' and 'Campaigner'. ... Potential titles of the next solo album were reported in the press: "Ride My Llama".  "In My Neighborhood".  "American Stars 'n Bars". "Chrome Dreams". But when American Stars 'n Bars was eventually released in 1977, Neil had scrapped most of the material he'd been recording since late '75, replacing much of it with a series of rough hewn cowboy songs...  Tracks 1 to 12 of this compilation are thought to be the unreleased Chrome Dreams album, readied for release weeks before Neil recorded those country hoedowns and rethought his strategy.  Some of these song titles will be more than familiar to you, but the actual performances may surprise you.  'Powderfinger' is performed as an unadorned solo acoustic song; 'Sedan Delivery', a second song destined for Rust Never Sleeps is presented in its pre-punked up arrangement and in many people's opinion sounds all the better for that; you'll also find the definitive 'Stringman', a song not given an official airing until Neil's Unplugged (1993) set, heard here in a 1976 live performance enhanced by subtle yet beautiful studio vocal and guitar overdubs; 'Hold Back the Tears' is another solo performance, longer and more ghostly than its later remake for American Stars 'n Bars; 'Pocahontas' is the same performance as the one that made Rust Never Sleeps, but in its original 'naked' mix; 'Too Far Gone' wouldn't be officially released until the Freedom album in 1989, yet here's a version from 14 years earlier with Poncho Sampedro adding a tasty mandolin part. The other six songs from the album were released more or less unchanged on the albums American Stars 'n Bars, Comes a Time and Hawks and Doves, yet you may still be able to pick out slight differences in the mixes.  'Homegrown', for one, would seem to have a little more fire in the guitars.  Have a listen and see what you think. We've chosen a select batch of bonus cuts to give you a further taste of just how creative Neil was during this fertile period."  - Jules Gray, 20 May 2004
(More info on bonus tracks also included on liner notes)

Personally, this is one of my favorite NY albums, certainly one of his best, if not his very best, it includes such a great selection of classic songs presented in primarily simple, acoustic arrangements. Just classic stuff.

Source/Lineage: Remastered from the best available sources of each track.
No other version of Chrome Dreams can compare to this.

P.S. I'm trying out Mega (FLAC link) for file sharing here. Let me know how that works for you.

Now, of course, there is still another classic unreleased Neil Young album out there that has still not been able to be bootlegged or reproduced (because not enough is known regarding what was actually on it). I am referring, of course to Homegrown, Neil's supposed 1975 album that he rejected in favor of releasing Tonight's the Night instead. We know that it was a mainly acoustic, country-rock album supposedly near ready for release when Neil dumped it, allegedly because it was just too down and depressing (supposedly containing material that dealt with his painful breakup with Carrie Snodgrass). It contained a couple songs that became part of Chrome Dreams, 'Homegrown' and 'Star of Bethlehem', as well as some that were released on the later albums Zuma, American Stars and Bars, and Hawks and Doves. Many songs were recorded during this very prolific period for Neil (some still never released), but it is not clear exactly which songs and versions were slated for the tracklist of Homegrown. But Neil allegedly has said that "Homegrown is the missing link between Harvest, Comes a Time, Old Ways and Harvest Moon", so as fans, we definitely need to hear it at some point. There has been word that the next series of releases in Neil's Archive Series will include official releases of both Homegrown and Chrome Dreams, so hopefully we will get to hear just what was to be Homegrown eventually, but just when that will be is still uncertain (It took more than a dozen years for the Archives Volume 1 set to emerge). So, at least we have Chrome Dreams to enjoy now and forever, and Homegrown may also become available sometime soon.

Addendum: Our music blogger friend Tyler from the fine site Doom and Gloom From the Tomb has made a noble stab at putting together a compilation that might (or might not) resemble what was intended for Homegrown. You can find it here: http://doomandgloomfromthetomb.tumblr.com/post/32393488141/homegrown-the-lost-album-neil-youngs-memoir-ist   While you're there check some of the other fine stuff he has to offer.

Great first post in your new anniversary year. The sound is outstanding, too. Thank you

This has always been a favourite of mine. I will compare the quality of this to previous copies. I can't believe I am done loading from Hotfile again. I have uses mega on other sites and I have no problems. Thanks.

Just to let you know that to my old tired ears the mp3 sounds great.

Congratulations on the anniversary and thanks for this. I've always thought "Look Out for My Love" contained one of the greatest examples of onomatopoeia in rock (the windshield wipers line, specifically) and I can't wait to hear what it might have sounded like in this context...

by far one of Neil's best lps. It's a shame it was never released.
glad to see you make it available.

Terrific-I have a few versions of this and really this is top notch.
For this post and all the others-THANK YOU VERY MUCH.

BB,
Excellent! As far as I can tell after a couple of listening this is an excellent quality version. Long lie CRUST!
Love
Newman

BB,
Excellent! As far as I can tell after a couple of listening this is an excellent quality version. Long live CRUST!
Love
Newman

Chrome Dreams was the first bootleg I ever bought. In the mid-90s I had never heard of it before and noticed it in the NY section of a little music shop in San Luis Obispo. I couldn't believe my luck and was so excited I bought it immediately. The liner notes were great because they explained exactly what it was that I'd just bought.

Thanks so much for sharing BB.

Great stuff. I put together a faux-Homegrown over here -- not anything remotely definitive, but fun! http://doomandgloomfromthetomb.tumblr.com/post/32393488141/homegrown-the-lost-album-neil-youngs-memoir-is

Tyler,
Thanks, Yes, I try to stop by your excellent blog every now and then and catch up on what you've been up to, and I did download your noble attempt at a 'Homegrown' compilation a couple months ago (I should have put in a link to your Homegrown entry, but just didn't think of it, but I'll fix that now - Thanks). But, you know what, like many other things I have downloaded recently, I just have not yet listened to it. I have it here somewhere and am interested to hear what you put in there, so I will get to it. Thanks again. Keep on Keepin' on.

First time i'm hearing this one. Excellent set and many thanks for sharing it.