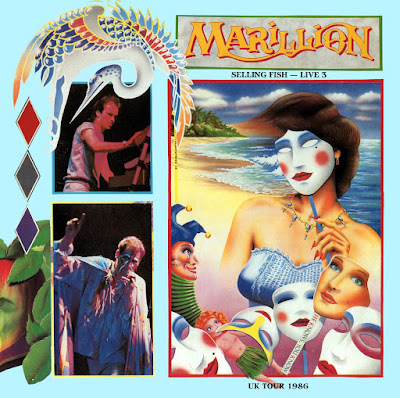 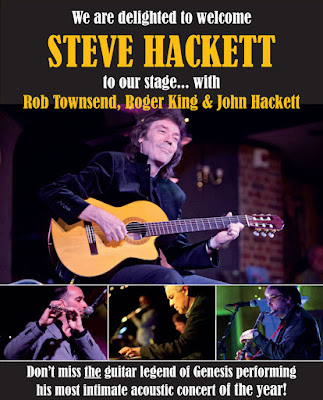 OK, to finish up this look at the career of guitarist Steve Hackett, and to bring things right up to present day, here is a unique intimate  show from last December (2018), where Steve and basically a chamber ensemble of Rob Townsend, Roger King, and John Hackett play an entire acoustic show at Trading Boundaries, the UK venue that is a restaurant, antiques showroom, and has in recent years become a haven for intimate concerts of progressive music.  This was such an interesting and unique show that I just had to include it here. But first, to catch us up on Steve, He continued to tour through most of 2018, through the U.S., South America, and Europe, Then in October played a series of shows in the UK with full Orchestra backing, and ending with a couple acoustic shows at Trading Boundaries in December. Somehow amidst all that touring, he also managed to record a new album, At The Edge of Light, which was released in January 2019.  The rest of 2019 looks to be just as eventful as well, starting with a couple of Cruise shows (see below for more info) in February, and the beginning of his 2019 tour, which will feature playing the entire Selling England By The Pound  album and celebration of 40th Anniversary of Spectral Mornings, and span through Europe, Scandinavia, USA, Canada, and the UK throughout the year. But the show presented here is very unique, not only in the intimate, informal coffeehouse atmosphere, but also in the style and setlist of the songs played. A wonderful experience and great recording of this unique event. 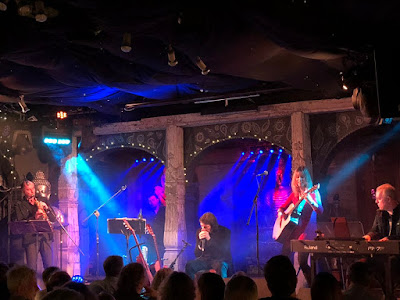 Cruise to the Edge: Another unique experience that Steve Hackett has participated in in recent years is the Cruise to the Edge, an actual voyage on a Cruse ship that features nearly round the clock live shows from a plethora of Progressive rock artists and acts, from classic bands such as Yes, Soft Machine, Brand X, PFM, and Steve Hackett, to newer and lesser-known bands carrying on the tradition of Progressive rock today. These Cruises have been conducted each year in February over the past several years, leaving from Tampa FL, traveling to Key West and Cozumel, and back, with a packed schedule of concerts every day. Billed as "The Greatest Prog Rock Vacation on Earth" (here is the Cruise website:cruisetotheedge.com). Fortunately, for all of us intrigued by this but who can't actually go on these Cruises, many audience recordings shows from the most recent Cruises (including 2014, 2017, 2018, and just out, 2019, thanks primarily to Lostbrook 2.0!). I don't have time or space to post them here, but they are available to download at the G101 Lossless Forum (just search for Lostbrook or Cruise to the Edge). Once again this year, Steve was part of the show, along with many great old and new bands worth checking out. Just shows how Progressive music is staying alive and vital right through today.
Posted by BBKron at 6:47 PM No comments: