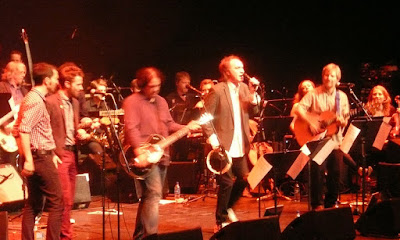 Wrapping up this celebration of Big Star and their music, as mentioned in the previous post, despite the death of Alex Chilton in 2010, and the earlier deaths of original members Chris Bell and Andy Hummel, Big Star has lived on in various forms, with surviving member drummer Jody Stephens, and through all the friends and supporters gathered over the years. Starting with the Alex Chilton Tribute shows in 2010, and then with the creation of various all-star assemblages of Big Star's Third Live shows, Big Star's music is still being heard live, still vibrantly vital, and more popular than ever. Organized and coordinated primarily by Chris Stamey (The dB's), who worked and played with Chilton for a number of years, Big Star's Third Live came together as a series of shows featuring the full horn, wind, and string arrangements of the original Third album sessions, and performed by many friends and colleagues of Chilton and Big Star. At that time, these full arrangements  had never been performed live before (as Third was an entirely studio creation, never performed live). So, Stamey and friends, featuring a core ensemble of musicians such as Stephens, Mitch Easter (Let's Active), Jon Auer and Ken Stringfellow (The Posies, Big Star), and a host of revolving special guests and friends, put on these shows featuring the music of Big Star (many other Big Star songs in addition to Third). Several of these shows were performed in 2012, 2014, and 2016. And just recently, a deluxe 2CD/1DVD album, Thank You Friends: Big Star's Third Live...and More, from one of the most recent shows (2016-04-27, Glendale, CA) has been released (and is excellent, highly recommended), featuring Stamey et al, as well as Jeff Tweedy and Pat Sansone (from Wilco) and a host of other guests on a great recording of a great show. Here, however, I have a show from 2012, in London, which features Stamey, Stephens, Easter, Auer, and Stringfellow and gang (with full orchestra), plus guest stars such as Norman Blake (Teenage Fanclub), John Bramwell (I Am Kloot), Sharon Van Etten, Skylar Gudasz, Brett Harris, Django Haskins (the Old Ceremony), Robyn Hitchcock, Ira Kaplan (Yo La Tengo), Sondre Lerche, Mike Mills (R.E.M.), Alexis Taylor (Hot Chip), as well as a special appearance by Ray Davies (The Kinks). It is a special show, a fine tribute to the band, and a fitting finish to this Big Star featurette in The Chronicles. Once again, thanks to dbs-repercussion blog for making this (and many other Big Star-related shows) available. 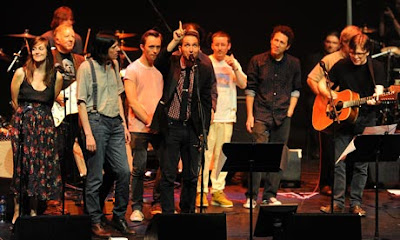 Posted by BBKron at 7:45 PM No comments: 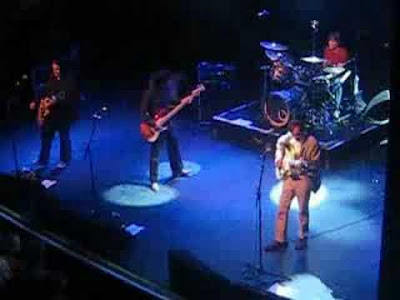 When Big Star re-formed in 1993 (18 years after breaking up previously) for a series of shows, few thought the reunion would last, but here they were, 15 years later, with the same group still performing as Big Star, although somewhat as a part-time activity (Jon Auer and Ken Stringfellow continued to record and tour with The Posies, and Alex Chilton continued various solo and other projects). They even recorded an album of all new songs in 2005, In Space (the only new Big Star songs since Third/Sister Lovers. So, here is a Big Star show from 2008, which, although consisting mostly of the same songs as earlier shows, this one also features some of the new songs from In Space, as well as a couple different covers. Unfortunately, Chilton's Big Star days were coming to an end, as Alex died of a heart attack in 2010, just on the verge of a major Big Star show at the SXSW festival. But not even Alex's death could end Big Star, as the SXSW show was staged as a tribute to Alex and the band, featuring his closest musician friends and colleagues, and many other tributes have continued in the days since, with the formation of Big Star's Third Live, a continuing tribute show featuring rotating all-star casts performing the full Third album with orchestral accompaniment (featuring original arrangements and charts), as well as numerous other Big Star songs, but more on that next time. For now, enjoy Alex Chilton and Big Star, continuing on in the 2000's. Once again, thanks to dbs-repercussion blog for making this available. 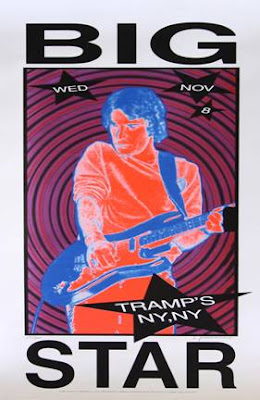 Continuing with the legendary, but originally unsuccessful,  power pop band Big Star (I've been on kind of a Big Star kick lately), as mentioned previously, there are few live recordings of the original incarnation of the band in the early '70's. But long after their early lack of success and demise, and following reissues of their previous albums, and a new live collection, renewed interest and popularity for the band lead Alex Chilton and Jody Stephens, along with new members recruited from The Posies, John Auer and Ken Stringfellow (original bassist Andy Hummel was apparently not interested), to accept a reunion gig at The University of Missouri in 1993 (which was subsequently released as a live album). Following that success, this version of Big Star continued to tour and play together on and off for the next several years. This show is from that period, from 1995, and Big Star's first show in New York since 1973, at Tramp's. They give an impressive, spirited performance, with Big Star classics peppered with several unique covers. The recording itself is pretty good, but not great, and gives a good representation of the band at that time. Thanks to Rob of the dbs-repercussion blog for making this available, and Rob has lots of other Big Star and Alex Chilton shows available here for those wanting to pursue Big Star further So, enjoy this reincarnation of Big Star in the '90s.