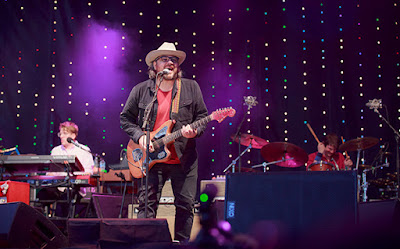 In honor of Wilco's surprise release of their fine new album (and available for free download! see post below), Star Wars, let's feature some Wilco, shall we? Wilco, of course, lead by Jeff Tweedy's songwriting, vocals, and overall style, and featuring the crack musical chops of the rest of the band, may not have reached great commercial success, but are highly respected and critically acclaimed, and have an avid and knowledgeable fan base. I consider Wilco to be one of the premier American rock bands around, always doing something ineteresting, always worthwhile to listen to, and always putting on great live shows, and last year Jeff Tweedy and company celebrated their 20th year as a band.Wilco has released 9 studio albums over that time (including Star Wars, but not counting some collaborations and side projects, such as the Mermaid Ave collaborations with Billy Bragg and Tweedy's solo album, Tweedy), all of them very good and showing various forms of stylistic changes and growth as they began as an alt-country offshoot of Uncle Tupelo and developed into a more experimental, idiosyncratic, and alternative rock band of the highest order. Which albums are favorites depends on which period and style one is most attrcted to, with Being There (1996) considered the high point of the early more countryish style, Yankee Hotel Foxtrot (2002) their most successful and acclaimed alt-rock, or some of their more eclectic gems, like Sky Blue Sky (2007) or The Whole Love (2011). Fortunately, it is very easy to hear live shows from Wilco, as their are many avenues available. The band has an open taping policy and actively encourages fans to trade and share audience recordings of their shows. The band also sells soundboard recordings of many shows as dowmnloads from their website store, and also features several entire live shows available for streaming at no charge. There also are several fan sites that feature many live shows available for free download and/or streaming. So, with all these opportunities to listen to Wilco shows (I'll list some of the best online resources below), I don't need to post much here, but I did want to post just a few things to get started with. So, here is a very recent show, where they premiered their new album in its entirety, the day after the album was released on the internet. So, this show featured the brand new album straight through, the first time these songs played live anywhere. This was at the Pitchfork Music Festival, which was in Wilco's own home town, Chicago, IL. In addition to the new album, the set featured many classic and favorite songs from the Wilco catalog for a wonderful show. Better yet, video of the entire show was streamed live on the web. This is audio taken from that live webstream. Hopefully, since this was broadcast, it is alright for me to make available here. So, anyway, enjoy this show (and if you look around, can probably find the video, too), and be sure to check out some of the other Wilco sites mentioned here.

OK, so here are some of the top Wilco resources to hear more of their great music and shows:

Wilco's official website: wilcoworld.net
official news and info, plus some entire shows for audio streaming, and many shows available for purchase in lossless and mp3 (Roadcase series) through their online store

Fan sites
For general info and discussion of Wilco, their music, and live shows: viachicago.org
For Streaming audio of many Wilco shows: sooutoftune.org

For downloading audience tapes of Wilco shows:
Live Wilco Archive: owlandbear.com/wilco-archive/
(hundreds of wilco shows available in lossless. However, only goes up to 2013 at present)
For some more recent (and classic) Wilco shows: nyctaper.com
(has several more recent shows from 2014 and 2015, as well older, classic shows 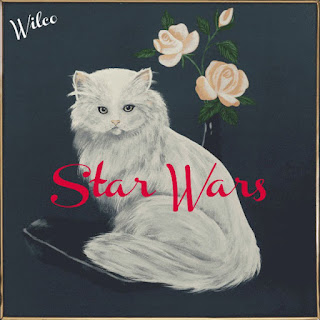 This just in - Wilco has released a surprise new album (no advanced word or announcement), and, for a limited time, they are making the album available as a free download from their website
(http://wilcoworld.net/). This is a very big deal, as a new Wilco album in itself is something to celebrate, and that it is being offered for free is a tremendous bonus. Apparently, this initially happened yesterday, but I just heard about it today, and have just downloaded the album. I haven't even had a chance to listen to it yet, but I assume it will be very much worth my (and your) time. Wilco's last album, The Whole Love, was released in September, 2011, and for my money, it was the very best album of that year. So, I have high hopes for this one, too. At the very least, it will be interesting, as Wilco always is. First, they went with the outrageous title of 'Star Wars' (and there is no corresponding song that would appear to be associated with that), and then have a still life-type painting of a cat on the cover. What? Anyway, if you haven't yet, be sure to take advantage of this great opportunity to get new music from Wilco for free. he physical (CD) form of the album doesn't release until around the third week of August, and I believe the free download will be available at least until first week of August, so be sure to get it now. I'll post more with some comments about the album after I have a chance to check it out thoroughly, and would like to hear back from some of you as well about what you think of it.

Get it now, at:
http://wilcoworld.net/

Posted by BBKron at 4:22 PM No comments: 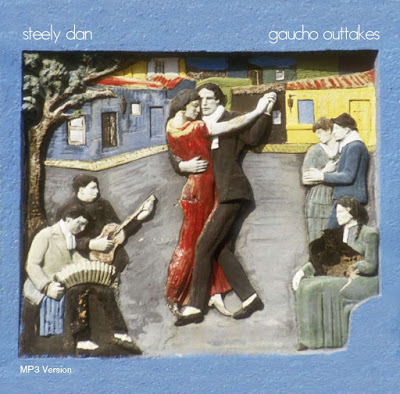 My previous post of Steely Dan's Lost Gaucho and Outtakes has consistently been one of the most popular posts ever here at the 'Chronicles'. So naturally, as I was preparing many posts for upgrading (to lossless and/or improved, upgraded quality where possible) a month or so ago, and since previously these were posted only as mp3 files, I planned on including the Lost Gaucho in this upgrade group. Coincidentally, around this same time, I was contacted by an alert blog reader who had recently downloaded the files from here, and who happened to be an audio engineer, and he noticed that for the entire CD1 of the post, the left and right channels were completely (180 degree) out of phase with each other, which resulted in cancellation and loss of sound from some frequencies (particularly low end), and an overall loss of fidelity in the recordings. When I checked it out, he was absolutely right, and as I checked around for other (and Lossless) sources, I found that all the available sources I could find also had the same out-of-phase problem, so it appeared that these were the versions that have been around the trading circles for years. Fortunately, correcting this type of phase issue is quite simple to do, and it is surprising that it has not been fixed before now. Anyway, my new audio engineer blog friend, Anthony Ochoa, was interested in not only fixing the phase problem, but also going through the recordings and doing some EQ and clean-up work on them to bring them up to a higher sound quality. So, that is what he did, and his resulting work on CD1 (The Lost Gaucho) has restored these files to a much fuller, richer sound, almost to a commercial quality level. Unfortunately, the many sound problems on the other batch of outtakes on CD2 were not so easily fixed, as Anthony told me, the "warbling & mushy" sound was probably due to a transfer from "a lousy cassette tape that was poorly calibrated and poorly maintained, as was the deck used to play it back" resulting in some sound problems that can't be fixed. Nonetheless, Anthony also did go through the lesser quality CD2 files and performed some "clean-up work" on them to fix some gaps, fades, and erroneous noise.  Thus, CD1 now has greatly enhanced sound quality, while CD2 only has some minor enhancements, but nonetheless this is an overall upgraded and improved package, and is also now available in lossless as well as mp3. Generally, for my recent upgrades, I have not made new posts, just updated the old one, but for this exciting new enhanced and upgraded version, I thought a new post was warranted. Thanks to Anthony for taking time to make these improvements and make this available. For more info and background on the original recordings and sessions, see the original post here. Note: I am leaving the original post (and link) intact, so that those interested in the unaltered files can still get those.