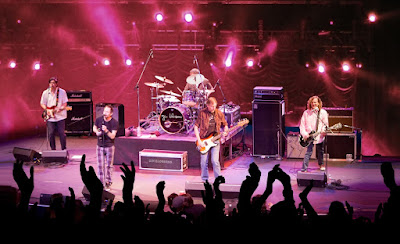 Continuing with the Gin Blossoms: Despite a very successful 2nd album (Congratulations I'm Sorry-1996) and subsequent tour, the band broke up in 1997 to go their separate ways. However, after a few one-off reunion appearances in 2001, the band decided to get back together for good in 2002, and started touring again. And basically, the band has been together ever since, including releasing new albums in 2005 (Major Lodge Victory) and 2010 (No Chocolate Cake), and a live album in 2009. And other than a somewhat frequent turnover of drummers (Spinal Tap Curse?), the core of the band (Robin Wilson, Scotty Johnson, Jesse Valenzuela, Bill Leen) has stayed the same since 1992. Here's a great-sounding show from their 2003 reunion tour. 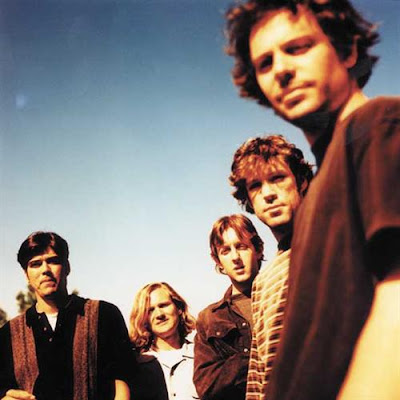 
Continuing with the Gin Blossoms, they followed up their multi-platinum debut album (New Miserable Experience-1992) with a non-album single ('Til I Hear It From You'), from the Empire Records film soundtrack in 1995, and their 2nd major album, Congratulations... I'm Sorry in 1996, as well as a major tour in 1996. The title of the album made reference to how they were often greeted in the aftermath of their breakthrough album (Congratulations - for their recent success, I'm Sorry-for the loss of their friend and former guitarist-songwriter, Doug Hopkins, who tragically killed himself near the end of 1994). Their subsequent songs proved, however, that Hopkins wasn't the only talented songwriter in the group, and Congratulations continued in a similar style as their first album, spawned additional hits (notably 'Found Out About You'), and was also a major success (Platinum status). This show comes from their extensive 1996 tour supporting the album, which puts the new album front and center, featuring virtually all of their new songs (entire Congratulations album and 'Til I Hear It From You'), half a dozen older songs, and a cover or two (such as Tom Petty's 'I Need to Know'). As this is a Pre-FM recording for radio broadcast it features excellent sound quality. A few tracks from an acoustic session in New York are thrown in as bonus tracks to round out the set. A great show from Gin Blossoms.

Posted by BBKron at 5:44 PM No comments: