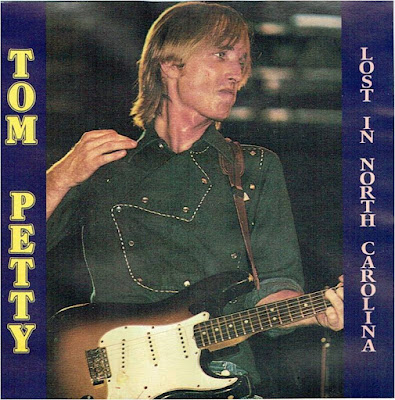 After the success of their Southern Accents tour (1985), Bob Dylan asked Tom Petty and The Heartbreakers if they would join him on his next tour, which would feature Petty and the band playing their own songs, as well as serving as Bob's back-up band on the Dylan songs. Well, how could they say no to that? So, in 1986 they toured all over with Dylan, performing as both headliners and back-up band to the legend (I've previously posted one of those shows here, and there are many shows from this tour available). Then in 1987, they released the next TP & The Heartbreakers album, Let Me Up (I've Had Enough) featuring the single 'Jammin' Me', and a subsequent tour of their own. After this, Tom took a bit of a break from the Heartbreakers and worked on other projects, including the Traveling Wilburys in 1988 and his first solo album, Full Moon Fever (1989). The story of the Wilbury's has been often told, but basically came about by accident, as when George Harrison was preparing to record a B-side for a european single, Jeff Lynne (who had produced George's most recent album, Cloud Nine) dropped by with Roy Orbison for Lunch, so George asked them if they would like to help out with the recording of a half-finished song for this B-side track. Since George hadn't previously booked any studio time, they headed over to  Bob Dylan's garage studio to do the recording. But then George remembered he had left the guitar he wanted to use over at Petty's, so swung by there to get it, and returned with not just the guitar, but Petty in tow as well. And since Bob was there at the studio, they asked him to join in too. So, that was how these 5 legendary figures all got together for an impromptu session. When the recording was finished, and the little ditty called 'Handle with Care' was played for George's record company, they said, Hold On, this is way too good to be used as an obscure B-side, this is a hit single! Can you make more of these? When George asked the group if they wanted to do more recording together, maybe make an album, everyone was in, and The Traveling Wilburys were born, and the album (Vol. 1, 1988) )was a major success. Petty then continued to work with Jeff Lynne as producer (and co-writer and performer) for his solo album, which although was not a Heartbreakers album, did have Mike Campbell also playing on all the tracks, as well as the rest of the the Heartbreakers (except drummer Stan Lynch) contribute parts to various songs, as well as other musicians, including Harrison and Orbison. Petty took this opportunity to explore more of his musical roots and styles, as well as some more gentle and introspective songs, deviating somewhat from the Heartbreakers Rock sound, and Lynne's production also gave it more of a glossier pop sound. The album, Full Moon Fever, was a huge success, one of the greatest of Petty's career, and produced such Petty classics as 'I Won't Back Down', 'Free Fallin', and 'Runnin' Down a Dream'. However, some of the Heartbreakers (especially Stan Lynch) were not too happy to be playing these solo Petty tracks at Heartbreakers shows, as they were not "their" songs and it made them feel a bit like a cover band. But the subsequent tour was another major success, and the 'solo' songs soon became a fixture of all subsequent Heartbreakers shows.  Here we have a combination of a couple great shows from the Full Moon Fever tour. The first, a great FM recording from North Carolina features some of the new songs from both Let Me Up and Full Moon Fever, and of special note is the middle section with new acoustic renditions of 'Even the Losers', 'Listen to Her Heart', and the rarely subsequently played 'Face in the Crowd' (in an absolutely beautiful version). Other highlights are the rarely performed 'Something Big' from Hard Promises and a new, more rockin' arrangement of 'Don't Come Around Here No More' (perhaps how The Heartbreakers would have recorded it without Dave Stewart producing?). The added tracks from the Holmdel, NJ show features covers of The Byrds and The Clash, as well as an acoustic 'Yer So Bad' and a rockin' 'Jammin' Me' closer.  Great sets. Enjoy

Note: This show (1989-09-13) has also been widely distributed in various bootlegs as being from 1990-05-18 - Wilmington, NC (with titles such as Southern Choice, etc.). However, all recordings I've heard attributed to this date have been this same recording as 1989-09-13. Although I do not know for sure the actual correct date, the information I have indicates that 1989-09-13 Chapel Hill is the correct date for this show. Actually, the recording version I used for this comes from the Southern Choice (Italian) boot, as that version has a clearer brighter sound (probably earlier generation recording) than some other boots ('Lost in North Carolina', 'Free Fallin') identified as 1989-09-13.
Posted by BBKron at 7:25 PM 3 comments: