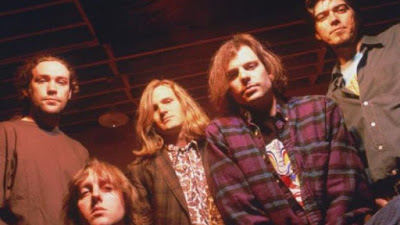 Here's the Gin Blossoms with some classic 90's power pop/rock. Hard to believe I haven't posted any 'Blossoms before this, as they are pivotal  to and fit right in with much of the other power pop type bands I listen to and have posted previously. They have a great unique sound and style that takes you back to those days in the early nineties. So here is the start of multiple Gin Blossoms posts. Gin Blossoms formed in Tempe, AZ in the late '80's, played locally around AZ for a few years, gaining popularity, until they attracted the attention of a major label, and signed with A&M in 1990. After some initial difficulty in recording their first major label album, resulting in release of an EP instead (Up and Crumbling-1991), they finally released their now classic first album New Miserable Experience in 1992, but not without additional problems. Lead guitarist and principal songwriter Doug Hopkins' struggles with alcoholism and self-destructive behavior was increasingly out of control, and the band was forced to fire him shortly after the album was finished. Now the band fully recognized that the strength of Doug's songs (He wrote 'Hey Jealousy' and 'Found Out About You', the bands first and biggest hits) is what got them their contract, but they couldn't continue with him, so he was out (unable to manage his drinking and depression, Hopkins killed himself in December 1993). Although not a hit right away, the album slowly gained momentum (on the strength of 'Hey Jealousy', follow-up singles, and successful touring) until it eventually became a huge hit by 1994, selling over 4 million albums. This show comes from early in their 1993 tour (actually before 'Hey Jealousy' was even released as a single), and shows their energetic style, sound, and performance abilities well. This comes from a WXRT FM broadcast, so boasts excellent sound quality. I've included a bonus track ('Idiot Summer') from a different date. Although this song was played at the Chicago show, it was not included in the radio broadcast (it also later was featured in the film Wayne's World 2), but here it is anyway. A condensed version of this show is featured on a widely distributed bootleg entitled In Bloom (containing part of this show with part of the Solano Beach CA show), but here is the complete radio broadcast of the Chicago show.