A Few Words About Willard and his Wonderful Wormholes

As many (probably most) who regularly read this blog know by now, the great music-oriented blog Willard's Wormholes is no more. And for those wondering just what may have happened to it, let me reassure you that it was not closed or shut down by any outside forces. No, 'Willard' just decided on his own that 10 years was long enough, and that he wanted to move on. And not wanting to attract undue attention or hoopla to the closure, he just quickly and quietly closed down the site. So, it is gone now, and as far as anyone knows, not coming back anytime soon. So, let me join the chorus of voices in saying a hearty "Thank you Willard", for all you did through your Willard's Wormholes blog, and its predecessor, Never Get Out of The Boat, and best of luck to you in whatever endeavors you go into next. You've earned a big break.
I was one of those that followed his blog from its very beginning, and it had a big influence on me starting this little endeavor here a short while later. As all who frequented the site know, Willard's Wormholes was most certainly one of the very best ever, if not THE best ever music blog of its type. Not only did it provide downloads of a wide variety of music types, popular and obscure, from classic blues and jazz to mainstream pop and rock to eclectic under-appreciated artists to obscure soundtracks, demos, and experimental sounds and sessions, but Willard always provided insightful commentary, information, and opinions on the music and artists. In addition, the musical community that developed around the Wormholes was the best on the internet, providing useful, helpful, and worthwhile comments and background, and the thorough and abundant reader links that developed provided an additional treasure trove of musical goodies for all to enjoy. And even that was not all, as it also featured weekly streaming movies of classic (and not-so-classic) sci-fi/horror films, special music archives, and the ubiquitous 'wormholes' with special features not to be missed. I downloaded much from the site, and learned even more, expanding the depth and breadth of the artists I listened to (most of the Miles Davis and John Coltrane and other jazz artists I have came from Willard, and I first learned about artists like Big Star, Jellyfish, The Grays, and Golden Smog, who are now among my very favorites, from Willard's blog). So, yes, I owe Willard's blog and the resulting community quite a lot, as does countless other music fans. Willard's Wormholes is gone, but certainly not forgotten, and it will stand as a model for how truly great a music blog and its community can be. It will surely be missed and likely never replaced, but those of us involved in finding, enjoying, sharing, and spreading music to all interested parties, will continue to do what we can ensure that the music lives on. Here's to you, Willard, Thank You!

For those that want to add their own comments regarding Willard's Wormholes, a couple of blogs of close friends of Willards have established something of tribute pages that you can read and add your comments to, such as Jakartass' Music here and  PowerPop blog here 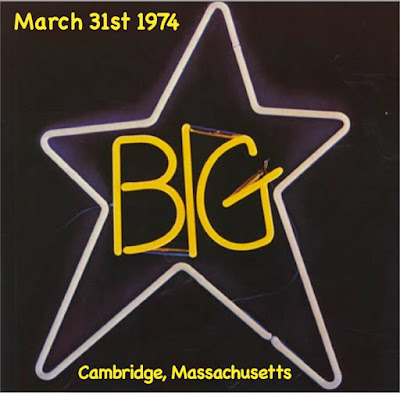 OK, here's a show from probably the most legendary obscure band of all-time, Big Star.  Little-known in their day, and quite short-lived in their original incarnation, they have nonetheless risen in stature to be recognized as one of the greatest of all power pop bands and influenced countless other alternative rock and pop bands that followed. Formed in Memphis, TN in 1971 by Alex Chilton & Chris Bell (guitars & vocals), Andy Hummel (bass), and Jody Stephens (drums), and starting when Chilton, hot off his vocalist success with The Box Tops, joined up with Bell and his previous band, Icewater, to form Big Star. Although their first album, #1 Record (1972), received rave reviews (and is now considered one of the great rock records), poor promotion and distribution, and other record company issues (released on Ardent Studios own label, Ardent Records, in conjunction with Stax Records, which was undergoing serious issues at the time), resulted in dismal sales and popularity. Featuring a mix of musical styles, from folksy acoustic numbers to driving rockers, a sharp-edged guitar sound and wonderful melodies, harmonies, and arrangements, they had a unique sound and style. However, failure of that first album lead to group infighting during attempts at a second album, and Bell quit by the end of 1972.  The rest of the band continued as a trio work on the 2nd album, which became Radio City, released in early 1974. But Hummel also quit the band before the album was even released. Radio City also received excellent reviews, and was expected to catapult the band to fame, but suffered the same poor marketing and distribution issues of its predecessor and promptly sank. Even those that wanted and searched for the album found it unattainable. The band toured briefly in 1974 (with John Lightman replacing Hummel), most notably opening for Badfinger in a series of US shows (which is represented in the opening set presented here). Then they started work on a third album near the end of 1974, with Chilton bringing in an assortment of other musicians to help out, and having a much different sound and style, and finishing in early 1975. However, they could not find a record label interested in the album, as it was not considered commercial enough, so the album was indefinitely shelved, and that was essentially the end of the original Big Star. However, in 1978, the first 2 Big Star albums were released together as a double album in the UK, receiving enthusiastic reviews and interest from fans. With this new support, the lost third album, ultimately titled Third/Sister Lovers, was finally released, both in the US and UK. However, by this time, Chilton had moved on to other things, various solo albums, punk bands, etc., and had virtually renounced his Big Star days. Also, around this time, original member Chris Bell tragically died in a car accident. But the Big Star legend was just beginning to grow, and several 80's and 90's bands emerged citing the excellence and influence of Big Star on their music, including REM, The Replacements, The dB's, The Posies, Counting Crows, Gin Blossoms, and countless others. In 1992, Rykodisc reissued their previous albums as well as a new live set from 1974. With the revived interest, Chilton and Stephens decided to re-form the band in 1993, adding Posies members Jon Auer and Ken Stringfellow, to do a series of live shows as Big Star. They continued on and off as Big Star over the next several years, even releasing an album of new material (In Space-2005).  Various other live shows, compilations of demos and studio sessions, box sets, and virtually anything the original band ever recorded have been subsequently released over the years, and new generations of Big Star fans continue to find and enjoy the band. Chilton, however, died of a heart attack in 2010. But the band has still lived on in various tributes, all-star assemblages (sometimes billed as Big Star's Third shows), and cover versions.
As stated, this show is their opening set for Badfinger in Cambridge, MA in 1974. It is a good mono audience recording (not great, but overall pretty good) - There are very few decent live Big Star recordings in general, and particularly ones that have not already been commercially released. And this one also illustrates the hard times this band endured in those days. Not only were their records not selling, but as the MC points out at the beginning of the show, Big Star had all their equipment (and their van) stolen shortly before this show, and had to scrounge together some instruments to play for the gig. It's also interesting that Badfinger and Big Star are together on the same bill here. Two of the greatest all-time power pop bands, but also two of the most tragic and hard-luck stories in all of rock and roll (see previous posts for Badfinger's story). But they both made great music. (BTW, I also have posted the full set - for both early and late shows - from Badfinger for this date, available here). So, it's great to now have the full show from both these great bands. Check it out. 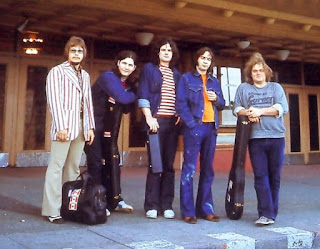 So, although you should already have these shows (if you don't, get them right away), here they are in full Lossless glory, for those that demand such things.
Posted by BBKron at 7:26 PM 5 comments: