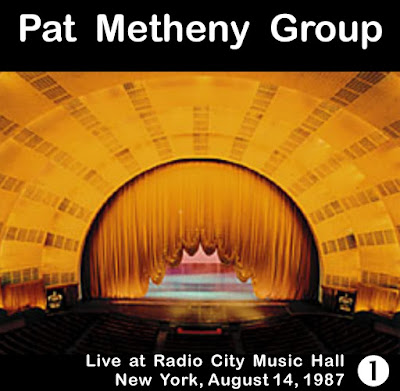 Here's more from The Pat Metheny Group, featuring keyboard virtuoso, composer, and arranger Lyle Mays. Picking up where we left of with the 1981 tour, their next album, Offramp (1982) featured the addition of Brazilian percussionist Nana Vasconselos adding 'wordless vocals' and a distinctive South American style to the band that would be a major musical theme of the band throughout the '80's. Offramp earned the band their first Grammy for Best Jazz Performance (the 1st of many). They released a Live double album, Travels, in 1983, followed by First Circle in 1984, which added more South American influences with the addition of Argentinian multi-instrumentalist Pedro Aznar to the band. First Circle brought the band to new heights of acclaim and popularity. The next project for the band was a soundtrack album for the film The Falcon and The Snowman (1985), which featured extensive use of original Pat Metheny Group music throughout, and even a hit single on the rock charts, 'This is Not America' featuring David Bowie on vocals. Their next album, Still Life (Talking) (1987), with addition of Brazilian percussionist Armando Marcal, is one of their most popular albums and acclaimed, featuring many songs that have become standards for the group. The show featured here is from their 1987 tour, a very good recording, but one where the audience cannot really be heard at all, and thus the only criticism I would have (other than starting the show with a recording of the dissonant and difficult to listen to 'Forward March') is that the band is just too perfect, it sounds just like a studio release. They are just amazing. The show features several songs from the new Still Life (Talking) album, a few songs from the recent Falcon and The Snowman and First Circle albums, as well as some older gems. As usual for them, they also include a preview of a song from their next album, the title track for Letter From Home (1989). Once again, a great show featuring all their many different styles. 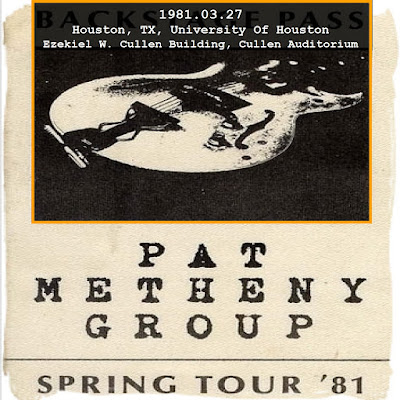 I have to pay tribute to another fantastic musician that has recently passed on. Jazz keyboardist, composer, and arranger Lyle Mays, best known for his long-time partnership and association with Pat Metheny and The Pat Metheny Group, died on Feb. 11, 2020, after a long battle with a recurring illness. he was 66. Mays was born and grew up in Wausaukee, WI in a musical family (father-guitarist, mother-pianist), listening to classical music and starting to play the piano at age 9. By age 14, he discovered Jazz, which changed his life. After a couple years at UW-Eau Claire, he transferred to the College of Music at the University of North Texas and became part of the award-winning One O'Clock Lab Band while attending there, becoming the primary composer and arranger for the group by the time he graduated in 1975 (and received his first Gammy nomination for the band's recording that year). After graduation, he toured with Woody Herman's Big Band, and in 1976 he started working with guitarist Pat Metheny on Metheny's second album, Watercolors (1977). Later in 1977, Mays and Metheny co-founded The Pat Metheny Group, which became a collaboration that lasted for more than 30 years. The Pat Metheny Group became a breakout success with their second album, American Garage (1979), with their melodic, improvisational jazz fusion sound and style crossing barriers into pop and rock categories, and bringing a flowing accessible jazz sound to new audiences, which revolutionized the way Jazz was perceived by many and opened the doors for new and exciting musical experiences. Their success continued through the eighties and nineties, bringing in additional influences and styles. I first became aware of The Pat Metheny Group at their start, and was immediately drawn into them, and it was an exciting new kind of music for me. And although the band bore Metheny's name, Lyle Mays was a crucial part of the band and their success. Much more than just the keyboard player, Mays co-wrote nearly all the music with Metheny and was the primary arranger for band. For me personally, Mays was the primary attraction of the band, and after following Metheny's many recordings (other collaborations separate from The Pat Metheny Group), I soon came to realize that if Mays was not a part of the band or recording, I was just not interested in Metheny's other musical adventures, as they just did not have the same magic as the Mays collaborations. Mays also had other collaborations outside The Pat Metheny Group, including the Metheny/Mays duo album, As Falls Wichita, So Falls Wichita Falls (1981), as well as releasing five solo albums, which also were highly regarded. He received 11 Grammys for his work with Metheny (and four additional nominations for his solo albums) over the years.  But Mays walked away from The Pat Metheny Group in 2010, as well as pretty much all of music. He ventured into other interests, including computers, software programming, and architecture. In an interview in 2016, he summed up his change in direction with “It’s not that I have a real desire to leave the music industry—I kind of feel like the music industry has left me. Or left all of us. People don’t want to pay for music anymore.” Lyle Mays was a sensational musician who will be missed. Here is a great show and great recording from the Pat Metheny Group in 1981, that features that great dynamic between Mays and Metheny, and includes a substantial portion from their duo album out at that time As Falls Wichita, So Falls Wichita Falls, as well as previews of the Group's next album Offramp (1982). I saw the band in concert around 1984, and it still remains one of the best concerts I have ever been to.