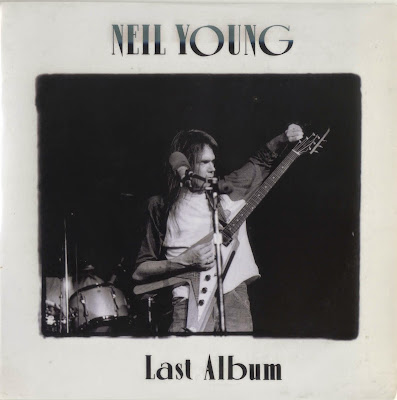 OK, just one more 'Neil' show, before I move on to other stuff. So, here's another 'oldie' from Neil. This one captures a rather dark and rough period for Neil (but musically rich). This comes from the Time Fades Away tour, which was during the time Neil was dealing with the death of former guitarist Danny Whitten, among other things (while rehearsing for this 1973 tour, Young dismissed his friend and guitarist Danny Whitten (as he was strung-out and not capable of performing properly) with a plane ticket and $50 cash. The next night Whitten was dead from $50 worth of raw heroin). From 1973-1975 Neil released Time Fades Away, On The Beach, and Tonight's The Night, all made within months of each other and sharing the same source of guilt, self-doubt and regret. That's a lot of pain to pour out onto three albums over three years after hitting the ceiling with Harvest and the million selling single, 'Heart Of Gold', in 1972. Those were chaotic days. Last Album is a two-CD set that offers the complete Civic Auditorium show in Bakersfield on March 11, 1973, plus several songs from a couple other early dates on the tour (at New York and Florida) that featured several different songs. It starkly captures Young's mood at the time. Nostalgic and pained.

Note, this compilation was was constructed from separate full-show recordings to replicate the tracklist of the older CD bootleg titled 'Last Album', but was not actually taken from that original bootleg issue.
The full show recordings (in FLAC) for the 2/3 and 1/14 dates are currently available at Plumdusty's Page, as well as many other fine lossless boots.

Hey! Wonderful site, thanks for all the Neil Young stuff. For some reason, I'm having trouble downloading this "Last Album" though. Any chance you could re-up it sometime? Thanks! Oh, you might want to check my blog http://doomandgloomfromthetomb.tumblr.com. A lot of homemade Neil Young bootleg comps there -- but probably nothing you don't already have! :)

Thanks, tylerw. I checked the links and did not have any trouble downloading, so maybe just try again. If still a problem, let me know. BTW, I checked out your site, and have DL'ed the NY 80's collection and some of your other compilations. Haven't listened yet, but looks really cool. Although I do have most of the tracks, always good to hear them in collections like this. I like your approach and appreciation of the 'lesser' or 'minor' works of guys like Neil and Dylan, etc. Great Job, Keep it Up.

Yeah, it's weird -- I tried again, and am having the same problem. The .rar file downloads fine and then I unstuff it and get an error message at the end. Might be a problem on my end? No big deal!

No problem here. Thanks!

Sounds From the Astral Creek said...

downloaded both parts again, and it seems that the .rar archive (part 2 FLAC) may be corrupted, as it won't extract. part 1 is good except for track 13 again :(

The files are fine (I re-downloaded and checked them). The problem is how you extracted them (or the extraction program used). The files need to be extracted together, they cannot be extracted separately. Make sure you have both parts 1 and 2 of the download together in the same folder, then extract part1, part2 will then automatically extract following part1 to complete the entire fileset. trying to extract separately will result in missing tracks, error messages. I use Winrar, and 7zip also is good, but I don't know about other extractors.