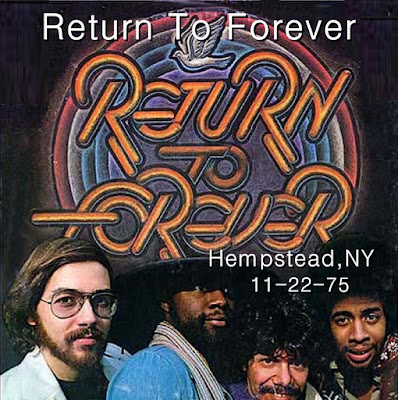 While we're visiting the neighborhood of the jazz fusion branch of the '70's Progressive Rock scene, how about some Return To Forever, jazz keyboardist Chick Corea's foray into the 70's fusion trend, with the best lineup featuring Stanley Clarke on bass, Al Di Meola on guitar, and Lenny White on drums. Their album veering the closest to a more rockin' style was Romantic Warrior in 1976, which was also their most popular and successful. Unfortunately, Al and Lenny left the band shortly after that album, and the band did not tour that year. Chick and Stanley reconfigured the band for the 1977 album Music Magic, taking the band in a slightly different direction and style, and never quite recaptured the feel or success of Romantic Warrior. Although there are no shows from 1976, here is a show from late 1975 that features an early version of the title track to their next album, Romantic Warrior, as well as virtuoso performances (with songs from previous albums and much improvisation). Check it out. 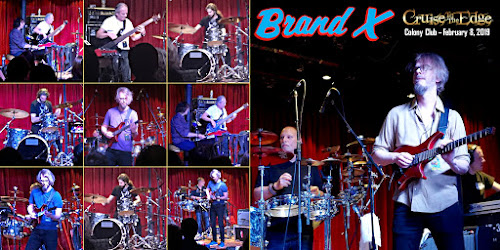 40 years after first forming the band, the original founders guitarist John Goodsall and bassist Percy Jones re-formed their jazz fusion progressive rock band Brand X in 2016, first for a special reunion show, but then the band continued on for further touring in 2017 and beyond. . The new version of the band had Chris Clark on keyboards, Scott Weinberger on percussion, and brought back Kenwood Dennard on Drums. In 2017, Kenny Grohowski replaced Dennard on drums. Demonstrating that they still had what it takes, here is a show from 2019. Unfortunately, Goodsall was not available for this show, part of a progressive rock special cruise (the Cruise to the Edge series - also featured on the Cruise that year: Yes, Steve Hackett, PFM, Pendragon, Soft Machine, Riverside, Gazpacho, and the David Cross Band), but guitarist Alex Machacek capably fills in.Thanks to taper Lostbrook who was on the Cruise and captured many of the shows on tape and has made them available. Check out Brand X still sizzling in 2019.

Posted by BBKron at 7:02 PM No comments: