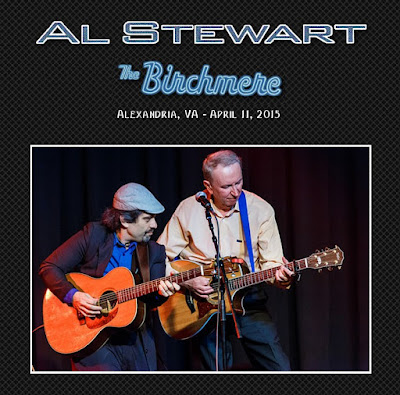 Here's Al Stewart, the legendary british singer-songwriter folk-rock musician, in a somewhat recent (2015) show at the Birchmere in Virginia. Although Stewart is most widely known for his string of hit folk-rock singles in the mid-70's ('Year of the Cat', 'On the Border', 'Time Passages'), he actually has been a major player in the British folk revival, both before and long after those mainstream successes, for over 50 years. Stewart is known and acclaimed for his delicately woven tales of characters and events from history, turning seemingly dry historical events (with topics ranging from the French Revolution to World Wars I and II to Warren Harding) into delightfully compelling, charming, and whimsical songs. Here we have Al in his more recent years, in a fine-sounding recording from the Birchmere, featuring songs from throughout his illustrious career, where here he is around 70 years old, yet his voice is still clear and shining as ever. Over the past 10 years or so, he has primarily played alongside his guitarist-accompanist, Dave Nachmanoff, who is featured in this 2015 show, with some excellent guitar-playing throughout. Dave's brother Michael also joins on bass for a couple songs, as well as opening act singers Amy Speace and Megan Palmer for the finale. But mostly the show is all about Al and his unique style and arsenal of quality folk-rock songs.