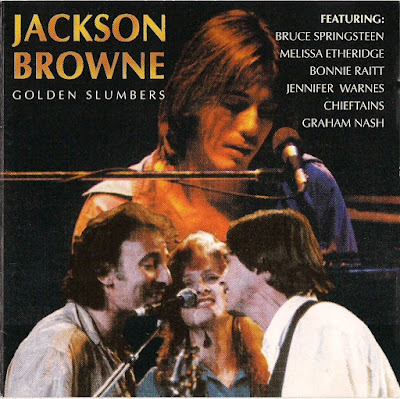 Here's a real treat for fans of Jackson Browne, the complete Golden Slumbers fan compilation, which is an excellent rarities collection that I have been trying to get my hands on for several years now, previously to no avail. But thanks to a kindly reader of the blog from the Netherlands (Thanks CVE!), who generously sent me CD copies of the full set, I now have it and can share it here.  This is a great set that brings together many bits & pieces, duets, live performances, radio sessions, one-of-a-kind moments, and miscellaneous rarities from throughout Jackson's career, including many one-off performances from various charity and benefit shows and rare backing vocal stints with others. It also includes a couple full-length live shows. But the main thing that makes this set so great is the superb sound quality of the bulk of the recordings. This is just an excellent sounding collection, with top-notch sound and recording quality across the board (and actually, the one instance where the sound was not top-notch - for the 1976-03-02 Tulane show, a much better quality (PreFM) version has more recently come available, so I have substituted the higher quality version for the one originally included with this set - So, the quality has been upgraded here, to remain superb throughout). This was originally available as a 3-CD set back around 1996-1998, but then additional volumes were added in subsequent years, but has been very difficult to find. So, here is the complete set. Hopefully posting this won't be a problem, but it does contain several individual songs that have been commercially released, but mostly on fairly obscure or out of print charity albums, soundtracks, or albums of other artists. Anyway, I have been enjoying this very much recently, some very interesting performances, and hope you like it too. (Note: some of the info about the songs included is incomplete or not accurate. This is inherent in the original set. I started to try to make some corrections or updates to the information, but didn't make it past the first disc, as it was just too time-consuming and didn't seem worth it, so I apologize for the incomplete info about some of the songs) 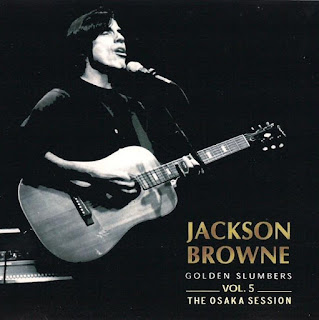 
OK, so to wrap up this extended look at Golden Smog and the various related bands and their contributing members, here's a unique show from 2004 that featured not only the Smog, but representations of contributing bands The Jayhawks and Soul Asylum as well (sorry, no Jeff Tweedy or Wilco presence here that night). This was a Rock For Democracy 2004 Benefit Show, and it appears that the sets may have been something that were thrown together at the last minute, with little preparation or lead-time rehearsal (several starts and stops, some stage disorganization). But that's part of the fun of these types of shows. Most of the Smog's set are covers (which represents what the Smog was originally, a cover band), including songs from Bowie, Neil Young, Eddie & the Hot Ro0ds, Bad Company, and Alice Cooper, as well as their own 'The Dream is Never Over'. Overall, it is loose, a bit sloppy, but a fun night of bar-room music from the various components and characters involved in Golden Smog, and a fitting finale to this 'Summer of Golden Smog' here at the 'Chronicles. 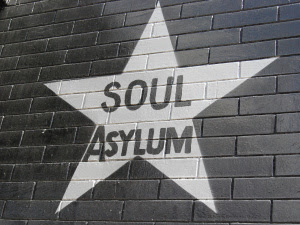 Here's some more from Soul Asylum, this time some demos and outtakes from around the time of their breakthrough album, Grave Dancer's Union (1992). This includes some early demo versions of several songs from Grave Dancers, as well as 4 songs that appear to be unreleased outtakes from these sessions. The Grave Dancers demos material suffer from some tape issues that indicate these are several generation duplicates of the originals. However, the unreleased outtake tracks are clearly from a different source, and are in much better, and high quality sound. So, although the demo versions of the tracks from Grave Dancers are interesting to hear, the real gems here are the previously unreleased outtake tracks ('Easy to Avoid', 'Some Obsession', 'Straight Up', and 'Thick and Thin'), which are very good, and a fine addition to the Soul Asylum repertoire from this period.