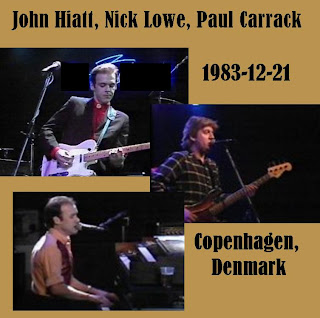 Here's a unique show from 1983 that neatly shows the collaboration between these 3 great performers. Previously, I've presented shows from Nick Lowe from around this period, his 'Noise To Go' and 'Cowboy Outfit' Bands that also featured Paul Carrack. As also previously mentioned, this band (which also included ex-Rumour guitarist Martin Belmont and Bobby Irwin on drums) served to back-up both Nick and Paul's solo albums around that time (Paul-Suburban Voodoo-1982, Nick-Nick The Knife-1982, The Abominable Showman-1983, Cowboy Outfit-1984,1985). In addition, they also were featured on John Hiatt's 1983 album, Riding with the King, which was also produced by Lowe. These 1983 shows in Europe and Scandinavia (where they were much more popular than in the U.S.) put them all together for a brief tour. So, we get all three leads taking turns doing their own songs, backed up by Nick's crack ensemble. This fits in nicely with the shows by each artist previously posted. Hiatt is obviously trying to promote Riding with the King, as all of his songs performed are from that album, whereas Nick and Paul do a mixture of new songs with old favorites from their various bands. This was still a few years before Hiatt would team up with Lowe again for 'Bring the Family' and finally become 'popular'. You can then follow the rest of these folks career outlined in the previous posts. A very interesting show and a worthy addition to the shows already posted, as well as a bit of 'history' to add to what is already outlined here.

This looks like fun. I never knew about this lot performing together. Discovering Hiatt through Ry Cooder being on "Bring The Family" was a real eye opener to me. I think that and "Slow Turning" were a very high quality pair of recordings and I have all Hiatt's work since as well as earlier one's like "Riding With The King".
Congratulations on 3 years..it's always rewarding to drop by