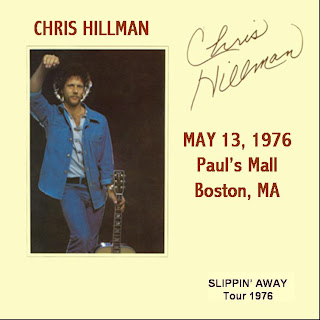 Barely a week after Firefall and J.D. Souther appeared at Paul's Mall in Boston (my previous posts), their friend and cohort Chris Hillman and his band also played multiple nights at the same venue. Here is a rare, previously uncirculated audience master recording from the final night of those shows (provided, once again, by the taper, our friend David M). Chris was also promoting his new solo album at that time, the soon-to-be-released Slippin' Away, and the show featured yet another variation of the Chris Hillman Band. I had planned on providing an edited version of the 2 sets, removing all the duplicated songs (the complete 1st set, then only new songs from 2nd set). However, I couldn't figure out a way to adequately edit them together wtihout losing the continuity and flow of the sets (In addition, although the 1st set is the most complete -- longer, more songs, better-known songs -- the recording for the 2nd set is actually a little better-sounding), so, I decided to just go ahead and post both complete sets, with most of the between song background and banter intact. This way, you have both complete shows to enjoy. If you want to rearrange and edit them down to remove duplicate songs, the whole show should fit on a single CD. Anyway, once again, this is great stuff, with Chris highlighting some great songs from the new album as well as a good assortment of FBB, Manassas, Byrds, and SHF Band classics. While introducing 'It Doesn't Matter', Chris even makes reference to the previous week's Firefall shows (Firefall also recorded and performed the same song), praising the band and asking if anyone there was at their shows. Well, thanks to David's tapes (and him making them available here), we all were there at that show, as well as this one and many other of these fine shows, even though they happened almost 35 years ago. Hope you all enjoy this wonderful show, and thanks again to David M for making it possible to experience these rare shows and recordings. Once again, I have done some minor editing to adjust volume fluctuations, smooth out rough spots, glitches, and transitions, etc., to make the recordings more enjoyable and presentable, but for the most part these are the complete shows as originally recorded.

Hot dang! I'll surely be lookin' forward to hearin' them that Still To Comes! Thank ye kindly in advancewise.