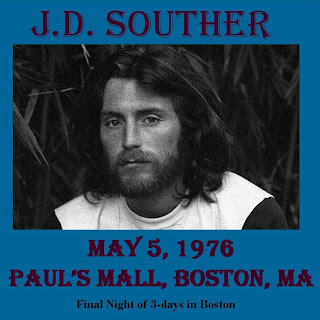 Here is J.D. Souther's show from Paul's Mall in Boston from the same night as Firefall (5-5-76), which was posted a few days ago. Once again, this is a rare, previously uncirculated audience master recording from our friend David M., exclusively available here for the first time anywhere! And this is a great show, in very good quality. After the demise of the Souther-Hillman-Furay Band in Mid-1975, J.D. returned to the studio to record a new solo album, and the recording became an all-star event, with friends and artists like Don Henley, Glenn Frey, Linda Ronstadt, David Crosby, Lowell George, Art Garfunkel, Andrew Gold, Joe Walsh, Waddy Wachtel, Stanley Clarke, and several others, all making contributions. The result was the wonderful album, Black Rose (1976). This tour in May 1976 coincided with the release of the album, and catches J.D. near the height of his most productive period. The show features mainly songs from his 2 solo albums with a couple SHF band songs thrown in. The first half of the set features Souther solo and acoustic, then in the second half he is joined by a lively backing band. It's great to hear both sides of Souther's songs, the softer introspective beauty of songs like 'Faithless Love' and 'Silver Blue', and the more rock and blues aspects of songs like 'The Fast One' , 'Banging My Head Against The Moon', and 'Midnight Prowl'. All in all, a great show. This is the complete first set. The second set consisted of the exact same setlist. Although mostly known as a songwriter, with other people often having more famous versions of his songs (such as The Eagles, Linda Ronstadt, or Bonnie Raitt), Souther is a fine singer and wonderful performer himself, and does definitive versions of all his wonderful songs. Always somewhat of a loner and recluse (perhaps why, other than the short-lived SHF Band, he never was part of a Band), he never toured much, which makes this 1976 show all the more special. Over the next several years, Souther only released 2 more albums (You're Only Lonely, 1979 and Home By Dawn, 1984) before somewhat dissappearing from music in the late 1980's. He did some acting in movies and TV in the 1990's, but wasn't heard from much after that. But then in 2008, he returned (after 24 years since his last album) with a new album, If the World Was You, which was recorded live with a 5-piece Jazz group (including Bela Fleck). If you are at all a fan of singer-songwriters or country-rock music, but aren't very familiar with Souther, you really owe it to yourself to check out his stuff, he is one of the best. And this show here is a great place to start. Give a listen to John David Souther in 1976.

I'm loving all of these shows, thanks so much for sharing all of them with us! By any chance, are any of the upcoming posts Gene Clark (uncirculated) shows? One can only hope :)

Robert,
Glad you are enjoying these shows. It is my pleasure to be able to share them. As for any 'new' Gene Clark shows, I'm not really sure. I have not gotten any Gene Clark shows from David (my source for the uncirculated recordings), but he may have some. I will check with him to see if he has any that he wants to share. Thanks for your interest and support.

BBKron, I really appreciate you checking with David and thanks to both of you for sharing all of these amazing shows with all of us. Take care, I hope you are having a wonderful holiday weekend. Cheers!

thank you very much for sharing...

Wow, very cool stuff, and thanks so much. I'm feeling young again.

Thanks for the J.D.Souther post & background comments. I had not heard of him until recently when reading a new biography of Paul Nelson, an early rock critic at Rolling Stone. Nelson lost friends & enraged many, including Jackson Browne & Don Henley, when he wrote an unfavorable review of Souther's album You're Only Lonely. The review caused such outrage that it made me curious to know something about J.D.Souther. Thanks again.