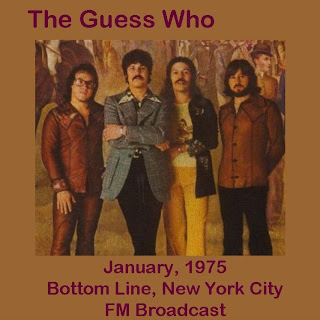 I ran across this fine Guess Who FM Broadcast show a couple months ago, and finding any quality show from this band is an event worth celebrating, as there are so few decent recordings of this great band available. Thus, this is a nice addition to the shows already posted. This is from around the same time (and similar quality) as the previously posted Electric Ladyland radio broadcast, from January 1975 (thus, this is the Dominic Troiano era, final year of the band). But what sets this show apart from that previous show, is that this one is much longer, including several hits ('Albert Flasher', 'Hand Me Down World', 'Star Baby', and 'No Time') and some extended songs/jams ('Those Showbiz Shoes', 'Long Gone') that were not included in the EL broadcast (A full 75 minutes!). Thus we get to hear more rants, scats, croons, and shouts from Burton Cummings, the greatest rock vocalist of all time (yeah, that's right - It's my blog and that's my stand), as well as some mighty-fine keyboard (Burton - for example,  check out the extended jazzy piano intro to 'No Time') and guitar work (Troiano). And they show that they can still do the full-fledged space-out hippie jam fest in their overly extended 'Showbiz Shoes' (at over 18 minutes long, when apparently even the radio station had had enough and faded out the song while the guitar solos were still continuing). At the very least, these extended jams serve to dispel the notion that this later stage of the band was a slicker and more pop-oriented version of the band - they still can rock-out with the best of 'em.  This show was around the time of the release of Flavours, from which they play several songs. They would record one more album, Power in the Music, later that year, before Burton would decide to pull the plug and leave to go solo.  Note: There was a cut/tape flip about 1:30 into 'Straighten Out', so I spliced in the missing section (about 10 seconds worth) from the EL show (and fairly seamlessly, I might add) to restore the full song. So, this is a slightly improved version over others available elsewhere. So, once again, although near the end of their run, it is still great to hear Burton and these guys play these classic tunes as only The Guess Who can. Enjoy!

Thanks for this one, BB. There's never enough quality live GW out there.

Cool stuff. Cummings played here this past weekend, and it was a great show.

Thanks! You can't get enough classic Guess Who!
John