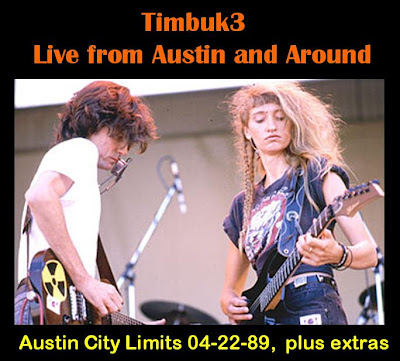 OK, next I want to feature some of my favorite lesser-known or underrated bands. First up is Timbuk3, who I really like, just a great, unique group. Formed around 1985 out of Austin, TX, Timbuk3 was basically the husband-wife duo of Pat and Barbara K. MacDonald, who played guitar (and harmonica and various other instruments) and sang live to pre-recorded bass and drums tracks played on a boombox. Timbuk3's music featured a dark, cynical outlook combined with clever, biting wit and humor set to strong melodic tunes and quirky harmony vocals. I just love their songs, sound, and great feel of their two voices together. Although they had success and a big hit song right off the bat (the iconic 'The Future's So Bright, I Gotta Wear Shades'), to some degree that initial success may have limited their overall career. For the most part, the biting sarcasm of the song was completely overlooked and it was embraced as a fun party song, and the pop audience wanted more of that kind of song, which just was not what the group was about. With their dark, quirky songs and sound, they should have been heartily embraced by the indie community, but surprisingly were not, maybe because based on their hit, they were apparently dismissed as some lightweight college pop band. But Timbuk3 continued undaunted with their own vision, even resisting adding a drummer and bass player, playing all the instruments themselves through their first three excellent albums (Greetings from Timbuk3, Eden Alley, and Edge of Allegiance, 1986-1989). But with their 4th album, Big Shot in the Dark (1991), they finally did add Wally Ingram and Courtney Audain on bass and drums, which substantially enhanced their overall sound, especially live. I saw them live around that time, where I picked up an excellent self-produced live cassette (no title, date, info, or label) they were selling at their shows (and which I still listen to today). They released an EP and one more album (Looks Like Dark To Me and A Hundred Lovers), as well as a best of collection, before breaking up. They broke up in 1995, as Pat and Barbara grew apart, both personally and musically, and with the dissolution of their marriage came the end of the band. Pat went to Spain for a few years where he continued to make music (although none released in the US), and Barbara also continued with a solo career. Although considered a 'one-hit wonder' in the pop music world, Timbuk3 was a great band that had a great vision, a great sound, and produced several great albums. Unfortunately, there are virtually no bootlegs or unofficial recordings of Timbuk3 available, except for this recording from their Austin City Limits half-show in 1989. Even worse, all of their official albums are now out-of-print. However, their independent live album (same show as on the unlabelled cassette, but now identified as 'Espace Ornano' recorded November 1991 in Paris) is still available on CD from the band's website (see below), and remains the only Timbuk3 music currently available for purchase.
This ACL show, listed as being from 4/22/89 (which probably was the broadcast date, and it most likely was recorded much earler than that, around fall 1988), features a suitably eclectic and quirky setlist, with a couple songs from each of their first 2 albums (including 'Future'), a relatively unknown B-side ('Assholes on Parade', which was editied out of the TV broadcast -for obvious reasons), a song from Pat's earlier group, The Essentials ('Looking For Work'), and a song from the earliest days of Pat and Barbara together ('Will You still Love Me When I'm Dead?'). Since this is a very short half-hour set, I supplemented the show with some tracks that are available on the band's web site, a couple from a Santa Cruz show, and a few sample tracks from the live album (Espace Ornano), featuring the killer and previously unreleased (non-album) track, 'Throw Down Gun'. If you like these, by all means please purchase the full live album from the Timbuk3 website.


Although the group disbanded in 1995, they still maintain an official web site (http://www.timbuk3music.net/) and myspace page (http://www.myspace.com/timbuk3theband) for the band. Pat is now back in his original hometown area of Wisconsin, still playing and making new music. In a fairly recent interview, he said that there were still alot of old Timbuk3 tracks that were never released, and that maybe someday he would go back through those tapes and put them out. Hopefully that will happen soon. Their cynically humorous (or is that humorously cynical?) takes on the issues, absurdities, and injustices of the day are sorely missed.


Bonus tracks obtained from the band's official web site. Paris tracks come from the band's self-produced live album, Espace Ornano, which is available for purchase from the Band's web site:http://www.timbuk3music.net/ 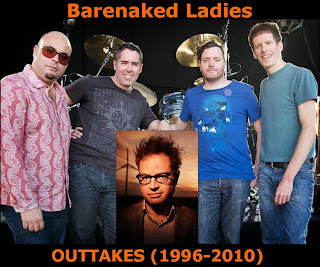 Here is a great collection of studio session outtakes from the Barenaked Ladies that I just got my hands on. This covers outtakes from 1996-2010 (from Born On A Pirate Ship right up through their newest (2010) album, All in Good Time), and includes several previously unreleased songs that were left of their respective albums, in addition to several acoustic performances of some of the album tracks. Of particular note are the four new songs from the All in Good Time sessions that did not make it onto that album (ironically including the potential title cut). Great to hear these additional BNL songs.

BTW, for those who have not yet heard it, and are wondering about the new album, All In Good Time (their first as a foursome after the departure of songwriter/vocalist Steven Page), here's my take: It's a good, solid album, with strong songwriting, impeccable production, and fine vocals and harmonies. Although not quite among the group's very best work, it certainly is not weak either, containing several memorable songs. My biggest complaint with it, however, is that the guys are far too serious on it, that is, it's not a 'fun' album, containing only one song that could be considered fun (the standout track, 'Four Seconds', easily the best song --and instant classic BNL tune). And for a band that has made it's reputation on fun, goofy songs (or at least clever, witty lyrics), it's entirely too serious (That, and a bit too much sniping at Page for leaving). Otherwise, it's quite solid and very enjoyable. Anyway, hope you enjoy these fine outtakes from over the past several years.