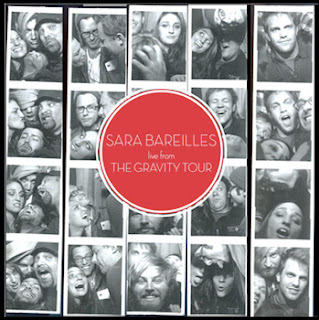 Again, sorry for the extended delay between posts, but here we are again, with something a little different, in that (1) this isn't something very old, and (2) it comes from a very talented female singer-songwriter, who regrettably haven't been featured much here previously. Now, I'm not presenting this from any kind of notion that I need to feature more women, or any other such nonsense. No, this is being presented because it is just damn good music. Now, I have to admit that I only discovered just how good Ms. Bareilles is quite recently, and I have just been floored by her songs and style ever since. Like most people I first heard her on her big hit 'Love Song' a few years ago, and although I was impressed by that song (strong piano and forceful defiant vocals), I assumed that she was just another pop singer, and didn't really follow-up to hear more from her. It was only after my daughter started getting interested in her, and I saw her on 'The Sing-off' that I started to pay attention. Her first major label album, Little Voice (2007), is just incredible, I highly recommend it, it contains excellent songwriting, superb vocals, and an extraordinarily cool style and feel. She is much more than a 'pop' singer, with a great jazzy, bluesy, gutsy, sultry style, and great songs (best tracks, the 1-2 knockout punch of 'Come Round Soon' and 'Morningside'). Her style has been described as "slightly edgy, stompy piano-based pop rock that incorporates jazz and soul" and I guess that is as pretty good, although somewhat generic, description. To me, I would say that she is the best new female singer-songwriter to come along since Norah Jones, and that's saying alot. Her 2nd album, Kaleidoscope Heart (2010) is a bit more pop-oriented, but still very good. So, if you haven't heard her beyond what is played on the radio, definitely check her out. Presented here is a live promo album that was previously given away free to fans through Sara's web site. It's pretty short, so I added a few tracks from the Live from Abbey Road set.

Hellooo out there! (sound of eerie echo returns). OK, things have been deathly quiet here since I last posted, just about a month ago. Sorry for the extended absence, hadn't intended on being away so long. Although actually, I have been back for a couple weeks now, just very very busy with my work, and haven't had a chance to get back to the blog. And honestly, it has also been difficult summoning the motivation to start posting again, what with all the problems and obstacles recently. But I still have a great interest in the blog, so I will get back on track with some new posts soon (as well as getting back to restoring some of the old posts that have been dormant for far too long). So, hang in there (keep checking back), and I'll get this show back on the road very soon. Thanks for your patience.