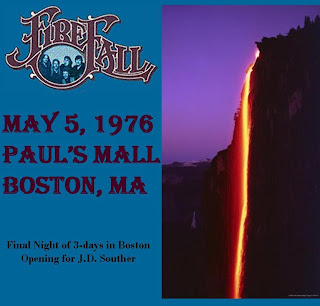 Here's another rare, previously uncirculated audience master recording from our friend David, available excusively here at the BB Chronicles! Here we have Firefall, on the last night of a 3-day run at Paul's Mall in Boston, opening for J.D. Souther. This represents the first set of shows from Firefall right around the time of the release of their first album. Thus, they are just on the brink of stardom, but not yet well-known, as their album has just been released. However, within a few short weeks, their first single 'Livin Ain't Livin' would be a major hit, and their album would be the fastest album to achieve gold record status ever. The band is loose and casual, but play a very tight and impressive set, supplementing their 1st album tracks with Rick Roberts' songs from his solo albums and the Flying Burrito Brothers (it's interesting that the FBB songs get the most enthusiastic audience response, because most of them did not yet know any of the Firefall songs). Thus, although it might at first seem odd for Firefall to open for J.D. instead of the other way around, this is at the very beginning of the band's career. And it's great to hear them at this stage, with the songs new and fresh (and before a more 'pop sound' encroached), playing more diverse songs and styles (showing more of their 'country-rock' chops), and being just a great bar hall band. This is also a very fine recording, clear and having a full range of sound (David told me he knew one of the roadies on their crew and they let him set up his recording equipment right on stage). Great Stuff. Included are all the songs from the first set, as well as the songs that were different from the second set. Once again, I have done some minor editing to correct some problems (volume fluctuations, speed correction, etc.) and enhance the overall sound and show (One note: There is a very brief minor tape glitch/cut at around 2:40 in track 13 (She is a Song) but lasts less than a second. If you like this show, you may be interested to know that previously available recordings (good quality, too) also exist for the first 2 nights of this gig, and may still be available through Rocking'byrd's blog (rocking-byrd.blogspot.com). To round out this show, I have also added 2 bonus tracks (of different songs) from the first night (5-3-76) to this collection (mp3-only, however). I will also be posting J.D. Souther's set from this same night (5-5-76) very soon. So, enjoy, and stay tuned for more.

Having just discovered your blog, I'd like to say thank you very much for what you have provided - some wonderful music here.

I like your blog, its oriented to 1970's Country Rock which I love. I did not think too many still follow this type of music. Thanks alot for the posts!

Thank you. I can confirm that both previous shows mentioned in the description (May 3 & May 4) are still available from my Rocking-Byrd blog.

Rick Roberts' first album is one of the undiscovered gems of country rock. I picked it up upon release in 1972 and have never stopped listening to it. Thank you for posting this early Firefall show which contains songs from that first record of his.

Thanks very much! This should be a real treat!