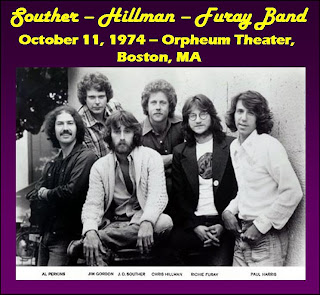 To finish off this run of rare, previously uncirculated audience master recordings of the SHF Band graciously provided by David of MA, here is a great, full-length (17 song) set from near the very end of their only tour. It features several songs that have not yet been heard in any of the previous shows posted, including Hillman's 'Heavenly Fire' (a classic from the 1st album that was not played at earlier shows) and a new song that would appear on their 2nd album, Souther's 'Mexico'. Also new to this show are a few gems from their past groups, such as Furay's 'A Good Feeling to Know', and Hillman adding multiple songs from the Flying Burrito Brothers ('Hot Burrito #2', 'Christine's Tune', and 'Dixie Breakdown'). In fact, this show features more of Hillman's songs (6) than any previous show (as wella a longer Bluegrass segment with both 'Christine's Tune' and the instrumental 'Dixie Breakdown'). It's a great show, probably the best of the bunch (considering the expanded set), and the recording is quite good, although the vocals are a bit muffled and not as prominent as they should be. Once again, I have gently tweaked the recording amd smoothed over some rough spots and glitches where I could.  This recording, at least for the time being, is available exclusively here at the BB Chronicles. I hope you've enjoyed this rare glimpse at the live shows from this legendary, but unjustly ignored and short-lived band. I know I feel truly honored to have been able to hear these shows at all, of which I never knew any recordings existed, let alone to be able to present these rare gems to you for the first time anywhere and finally make them available to the public. Thank you David. I will try to continue to periodically provide some more of David's exclusive recordings as I get them and as they become available. But for now, please enjoy this last dose of the SHF Band before they each went their separate ways.

thanks. they've been enjoyable