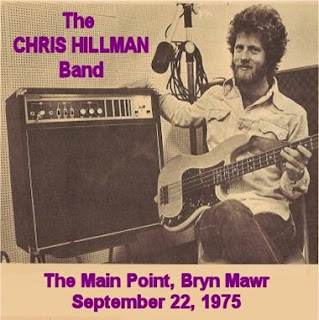 Here's Chris Hillman and his band in 1975, which could have been called something like the 'Firefallin' Burrito Brothers'. After the SHF band wrapped up their tour in late 1974 and head back into the studio to work on their 2nd album, it was clear that the personal differences within the band had become a major problem. Ritchie Furay's recent conversion and burgeoning enthusiasm for evangelical christianity (aided and abetted by Al Perkins) was an annoyance to Souther and Hillman, who formed the 'Heathen Defense League' in response to repeated efforts to 'save' them. They each wrote their own songs and only came together to record them. When the album, the aptly titled Trouble in Paradise, was finished and released in 1975, to generally lackluster reviews and sales, and a planned tour was cancelled (supposedly due to an injury to Furay's hand, but possibly also because the principals had just lost interest), the group quickly disbanded. Actually, although Trouble in Paradise couldn't match the excellence of their 1st, it is still a quite solid album, containing gems such as Souther's title track and 'Mexico' and Hillman's 'Follw Me Through'. After SHF, the 3 stars quickly returned to solo careers and each released a new solo album in 1976 (Souther's Black Rose, Hillman's Slippin Away, and Furay's I've Got a Reason). After the breakup of SHF, Hillman, in particular wasted no time getting back out on the road. He called up friend and former FBB alum Rick Roberts, who by now had formed a new band, called Firefall, which was practicing and playing together but did not have a record deal or any recordings yet. So, Roberts, along with his Firefall mates guitarist Jock Bartley (who also earlier played with Gram Parsons) and bassist Mark Andes (formerly of Spirit) joined Chris to form the temporary and hastily put together band dubbed the Chris Hillman Band for a series of concert dates in the fall of 1975. Actually, it was towards the end of these show dates, when Chris became ill, and had to dropout of the tour, that Firefall continued the shows on their own, and attracted the Attention of Atlantic record execs, who offered them their recording contract, and they almost immediately began recording their first album. But in this show, earlier in the tour, Chris was definitely in charge, playing a mixture of tunes from his various bands, from the Byrds, Burritos, Manassas, and SHF Bands, as well as a few new tunes (such as 'Step On Out', 'Take it on the Run', and 'Down in the Churchyard') that would later appear on his 1976 solo album, Slippin Away. Here are both sets from his excellent Main Point show, and a very fine recording it is. Thanks to the excellent Rocking-byrd blog (rocking-byrd.blogspot.com) for this one, as well as so many other fine Byrds-related shows.

Glad to see that my uploads still generate some interest in Byrds circles...

Wow, excellent. I love Hillman. Thanks for the link to the Rocking-Byrd blog. I can't access it though... says I need an invitation. Can you send me one?

Hi I would like to say to Rocking Byrd...

Hi ! Rb, I am very disappointed that i cannot access your blog as it is the best
and most comprehensive archive for any Byrds fan.I have always tried to leave supporting comments and opened a Gmail account to keep in touch but it won't let me on! Can you help as your blog is really important and interesting to me. Best wishes Kevin.

I was at that show (late show, I believe). Thanks for the set list and reviving that memory.
Dan