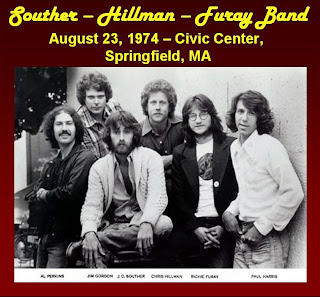 Here is another rare recording of the great, but short-lived, country-rock 'supergroup', the SHF Band, from their only tour in 1974. This is another previously uncirculated, good quality audience recording from David of MA, available exclusively here at the BB Chronicles. Although this is a shortened set and doesn't feature any songs that are not present on the other 2 posted shows, overall there is good sound quality and strong vocals (especially early in the show). There were a few problems with the recording, however, so once again, I did some editing and tinkering to smooth over some rough patches. Most notably, there was a major cut near the end of Pretty Goodbyes (last 1:30) through the beginning of The Heartbreaker (first 0:30 sec), so I spliced in the missing parts from the Central Park show. It's not a perfect match, but it's better than nothing. As a bonus track, I also added a new song from another show from around this time. It is 'Follow Me Through', A Chris Hillman song that would appear on their as yet unrecorded second album, taken from their Yarmouth, MA show (1974-8-17 - Cape Cod Coliseum). Since this song was not played at any other shows around this time, this might be the first time the song was played live. Unfortunately, the available recording from the Yarmouth show is not that great, so I only included this one song, because this was the only new song not played at the other shows. Anyway, as I said, these recordings are far from perfect, but they are still pretty good, highly listenable, and they appear to be our only musical documents of the live history of this fleeting but impressive band. Hope you like it.

Thanks for posting the SHF shows!