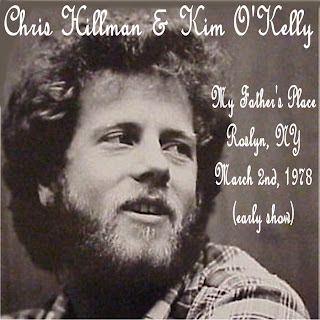 A couple more Chris Hillman shows I want to post. This one is a unique acoustic duo show featuring Chris and Kim O'Kelly, who was a back-up singer in his band at that time. This was a rarity for Hillman, who up to this point at least, had always performed with a band. These acoustic versions of many of his songs, as well as the addition of a female voice, provide some interesting highlights to Hillman's songs. Hillman released fine solo albums in 1976 and 1977 (Slippin' Away and Clear Sailin'), and primarily toured with his own band, the Chris Hillman Band (although a completely different band than the 1975 CHB, because now Firefall was a hit band on it's own) in support of those albums. This acoustic show was a bit of a change, then, but still featured many songs from those solo albums ('Step On Out', 'Witching Hour', 'Lifeboat', 'Love is the Sweetest Amnesty', 'Fallen Favorite', and 'Nothing Gets Through'), as well as a healthy selection of tracks from his previous FBB, Manssas, and SHF Bands. Shortly after this (in June 1979), Hillman would join former Byrd-mates Roger McGuinn and Gene Clark, who had been performing and touring together for awhile, to form McGuinn Clark and Hillman (MCH), which was not quite a Byrds reunion, but something similar. MCH would become quite successful both as a touring act, and eventually recording 2 albums of new material (although many Byrds fans objected to the slick style and production of those albums). Clark once again would leave the group early (in 1981), and McGuinn and Hillman continued for some time longer as a duo (and another album). But here, we have Hillman, on his own, singing and playing a casual acoustic show with singer Kim O'Kelly at My Father's Place in Roslyn, NY. Again, thanks to Rocking-byrd for making this and many other Byrds-related shows available through his blog (rocking-byrd.blogspot.com).

Anyone else having trouble downloading this? It seems like one of those rare, weird Megaupload links that starts out fine, then hits a wall and freezes up.

If you could re-up it, BB, it would be much appreciated. Thanks!