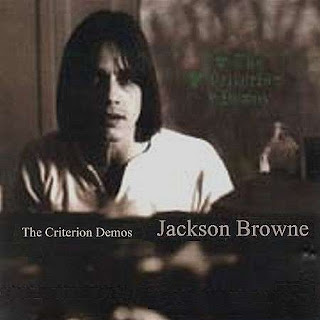 
Wow! Here is a real find, and I am very happy to finally be able to present it here. This something I have been looking for ever since I heard about it years ago, the legendary Criterion Demos made by Jackson Browne in 1970. It includes early demo versions of most of the songs from his first official album, but more importantly, about half of the 19 tracks are never-released songs by Jackson. Some of these unknown songs are startlingly good, but were surprisingly never developed any further for future release. Unlike the much earlier Nina Demos (made in 1967), which contained mainly undistinguished, forgettable, or uncharacteristic-sounding songs (but still historically interesting), this is the Jackson Browne that we know and love, just in the early stages. Thus, this is a treasure trove for fans, but has been very difficult to find for even dedicated Jackson Browne fans. No more. Here it is.

Background: Jackson signed a co-publishing agreement with Hollywood's Criterion Music in the fall of 1969. These demo tracks were recorded in early 1970, prior to his hooking up with David Geffen, which took place later in 1970 and the recording of his first album which took place in 1971. In fact, it was this demo version of "Jamaica Say You Will" from the recording session at Criterion Studios -- which Jackson sent to David Geffen -- that attracted Geffen's attention. The track included backing by J.D. Souther (on drums?), Glenn Frey, and Ned Doheny. This was not an official album, nor was it ever intended as an official release. It was merely Jackson Browne making some demo recordings in his role as a staff writer for Criterion Music. These recordings were intended to be used to promote Jackson's songs to other artists for recording.

All songs written and performed by Jackson Browne

My favourite living singer-songwriter he is. And this is surely great.

In Cameron Crowe's excellent longer version of Almost Famous (Untitled), CC flicks through some of his favourite albums circa 1973/74. The only one I didn't know was Late for The Sky by Jackson Browne (I only knew the name) but that was recommendation enough for me. . .

Wow. Couldn't believe that I'd missed out on LFTS / Jackson Browne. I needed to hear more from the start so that's what brought me to your blog. Just wanted to say thanks a million for putting up the Criterion demos - what a treat.
Thanks again.
Martyn

Glad you found us, Martyn, and glad you have discovered (albeit a bit late) the greatness of Jackson and his music. LFTS is indeed a masterpiece of songwriting and musical execution. It is my favorite Jackson album, one of my top-ten favorite albums of all time, and one of the most important albums in my life. That album, in particular, really helped me greatly through tough emotional times in my transition years from high school through college way back then. I don't know any other artist that can quite capture such personal emotional moments and give them a universal depth like Jackson does. Of course, I enjoy all of his music, and all of his songs, but LFTS will always be special for me. So, welcome, and be sure to also check out Jackson's 8-CD live solo acoustic compilation (Song Traveler)available here on the blog. And Thanks for sharing your comment. It means a lot to me to hear back from readers who really get something out of this blog.

Thanks BBK, not heard this before. Another one to add to the collection. I wonder what further little goodies you have. look forward to your posts.

I remember reading in Rolling Stone so long ago about this wunderkind who'd written all these master-level pop songs, and wondering what had gotten the attention of the magazine writers, since he hadn't recorded anything of his own yet.
This must have been the tape that set LA on fire that year. How great to hear it now; thanks.

Thanks so much for posting! Does anyone know how to open the FLAC files/ are they compatible with ITunes?

I'm not sure if anyone will see this but i thought I'd give it a shot -- when i download (either the mp3 or the FLAC versions), it isn't regular zip file but goes into calibre as a book -- has anyone had this happen? I just don't see a way to actually get at the music files!

Thanks in advance for the help if anyone can suggest something!

LMB76, All of the music files here (and on many other music sites)are compressed into .rar files. You will need to extract the music files contained within using a file extraction program that recognizes rar files (such as WinZip, WinRar, 7-zip, etc.) that are available for free download around the internet (just google rar extraction). Once extracted you will see all the individual music files as mp3 or FLAC, which then can be played.

Thank you so much! For the record, I own multiple copies (both LPs and CDs) of Jackson Browne's entire oeuvre but the Criterion demos promise to be a treat!

Thanks again! And now that I've found your blog, i'll be sure to visit again.