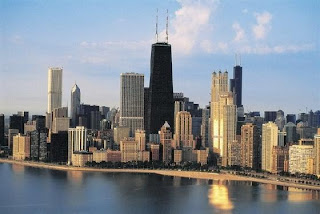 In 1972, the local Chicago Public Broadcasting station, WTTW, began a pioneering live music show called 'Made in Chicago'. This was, as far as I know, the very first prime-time music show that was devoted to extended live in-concert performances on US television. It changed the way music was generally presented on TV, as it featured more in-depth, live performances of particular artists (as opposed to just 1 or 2 songs, often lip-synched, that was the norm on music and variety shows up to that time). This was before Austin City Limits, and also before ABC's 'In Concert'. Some of the shows were even simulcast in FM-stereo by a local rock station, WBBM-FM, for better sound quality. The show started out featuring successful local Chicago artists (mainly folk-rock), such as John Prine, Steve Goodman, Bonnie Koloc, Aliotta Haynes & Jeremiah, and Bill Quateman in the first season. In the second season (1973), in addition to other popular local rock acts (such as Styx and the Ides of March), they began featuring some more nationally-known acts, such as Jim Croce and Gordon Lightfoot. By the third season, in 1974, the name of the show was changed to 'Sound Stage', as it was expanded and distributed nationwide as a national PBS show. Sound Stage became the premium musical showcase on television and remained a staple of public television from 1974 to 1985, and then was reborn years later in a new series and form in 2003, and has continued right up through 2010. the show is still produced by WTTW, and most performances take place in WTTW's Chicago studios. But, back to the original Made in Chicago broadcasts, unfortunately, it does not appear that any of the original tapes (either audio or video) from the Made in Chicago broadcasts were kept, as they have not appeared anywhere. I remember that I taped several of them off the radio, including the Ides of March, Styx, Jim Croce, and AHJ-Quateman shows. Unfortunately, my recordings were made on poor quality cassette tapes, most of which did not survive the ensuing years. However, one that I still do have, and have listened to repeatedly over the years is the 1972 show that featured Aliotta Haynes & Jeremiah and Bill Quateman (each getting a 30 min segment). Although the tape is not of good quality, it is listenable, and contains rare live performances and songs by both of these great Chicago acts. I was hoping to have these shows posted and ready for download by now, but I don't have them quite ready yet. But soon I will be posting them, and it is a real gem of a find for any fan of that early '70's Chicago Music scene, 6 songs from each of these acts, including some rare previously unrecorded or released gems that cannot be found anywhere else in any form (unless someone else has a better copy of a tape from this performance). So, sorry for the delay in posting these, but stay tuned for two of Chicago's finest acts from this period, Aliotta Haynes & Jeremiah, and Bill Quateman.
Posted by BBKron at 3:26 PM

Holy Cow, live A,H&J! Recently downloaded "Lake Shore Drive" from Amazon - could not believe it's still available. For those readers not familiar, "LSD" is one of the best road songs ever written. Also worth seeking out: "For Eddie", a beautiful song asking forgiveness.

I'm excited by this...and believe me that takes a lot these days.

You'll never believe it, but I found a tape with this episode of Made in Chicago on it - on video! Transferring it right now but probably won't have it up for a month or so at least. Amazing. :-)
Cheers,

Wow! That is great to hear. I thought this was long lost. I would love to have a better quality version of this show, not mention the video footage as well. I look forward to seeing this become available. Thanks alot.

Here it is! Enjoy!