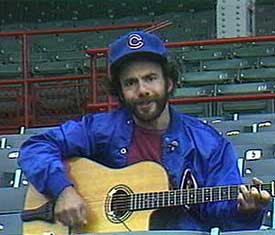 Since we are now in the midst of the baseball postseason, I just wanted to add one more item about Steve Goodman. I had planned on including this with the previous post, but it was getteing too long as it was. Anyway, Steve was a big baseball fan, and more importantly, a lifelong Chicago Cubs fan. Now, the Cubs have not won the World Series since 1908, and had never even made the postseason during Steve's lifetime. Steve put into his song 'A Dying Cub Fan's Last Request' some of the bitterness and frustration that goes along with being a Cubs fan. When that song started to get airplay in Chicago around 1983, the current general manager of the Chicago Cubs, Dallas Green, was asked to comment on what he thought of the song, to which he complained that it was just too damned depressing. When Steve heard about this, he decided to write an upbeat, postive song about the Cubs in response. So, Steve wrote and recorded Go Cubs Go, a cheery, catchy 'fight-song' style ditty. In 1984, when it looked like the Cubs might actually have a good team, they started playing the song on WGN game broadcasts and at the ballpark. The song caught on and became the rally song for the Cubs that season. As the season progressed, and it looked like the Cubs might actually win their division and make it to the postseason, or possibly even go th the World Series, Steve was asked to sing the National Anthem and throw out the first pitch at the Cubs opening playoff game. Unfortunately, Steve's health took a drastic turn for the worse before the end of the season, and Steve died four days before the Cubs clinched their division title and a spot in the playoffs. Steve's friend Jimmy Buffett filled in for Steve by singing the national anthem at the opening playoff game. Thus, Steve lived his entire life without seeing the Cubs even play in the postseason (Their previous postseason appearance was in 1945, 3 years before Steve was born). However, even if Steve would have lived to see the 1984 playoffs, it only would have lead to more frustration, anyway, because the Cubs blew a 2-0 series lead (in a best of 5 series) by dropping the final 3 games to miss out on the World Series yet again. Perhaps it's fitting (at least to the spirit of the 'Dying Cub Fan's' song), that the Cubs have since blown opening round postseason series in 1989, 1998, 2007, and 2008. The closest they came to the World Series was in 2003 when they were within 4 outs of winning the NL pennant and a trip to the World Series, when they fell apart in the 8th inning, lost a 3-0 lead, and ultimately the series (all through a bizarre series of events that included interference from a fan in the stands, multiple errors on the field, and the meltdown of the their best pitcher). Thus, even now, almost 30 years after Steve wrote 'A Dying Cub Fan's Last Request', everything in the song is just as true now as then, perhaps even more so with the passing years, as the Cubs have continued to be a source of bitterness and frustration for their tortured fans. Steve's song 'Go Cubs Go', however, received new life in 2007 & 2008, when it was taken up again by the Cubs as their victory song, and was played at the ballpark after every Cubs win. And although the team did win their division and make the postseason that year, they were quickly swept away from the playoffs with 3 straight losses. So, why am I bothering to post all this seemingly trivial information? Well, like Steve, I am a lifelong Cubs fan, too. Not that I want to be, mind you, but I don't have any choice, it is ingrained in me from childhood. No matter how fed up and disgusted we get, and say we don't care what happens, we can never completely turn our back on them. They will always be my team. And one day, ONE DAY, they will win it all, and all of us dying Cub fans can finally rest in peace. So, I understand competely why Steve was a Cubs fan, and all that goes with it, and why, after putting out all his frustrations in one song, he turned around and wrote a pep song glorifying for the team in another. So, as we face another baseball postseaon without the presence of the Cubs (they finished next to last in the league), here's a shout-out to all anguished Cubs fans out there, and another special tribute to Steve Goodman, musician-performer-singer-songwriter extraordnaire, but also a baseball fan, and Chicago Cubs fan.

You can hear 'A Dying Cub Fan's Last Request' in disc1 of the download of the 1982-3 shows below.

And here's to departed Cub fans looking on from the best seats in the house.

And now, finally, Steve and all the other Cubs fans, whether still with us or passed on, have their ultimate victory. The CUBS have won the 2016 World Series! After 108 years it finally has happened for real. Congratulations to the Chicago Cubs and all their fans wherever they may be.