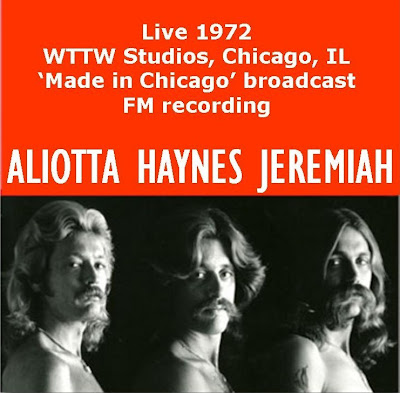 Note: Date was originally posted as being 1972, but has now been changed to 1973 after additional info surfaced - original broadcast date appears to have been April 11, 1973 (still unknown recording date).

Here is a special treat for anyone that followed the Chicago music scene back in the 1970's (and is worth checking out even if you know nothing about that). So, here it is, the first part of the 1973 Made in Chicago show that featured Chicago legends Aliotta Haynes & Jeremiah (AHJ) and Bill Quateman. Both of these acts were unique and original, and epitomize the vibrant local music scene at that time. Unfortunately, neither act achieved much fame beyond the Chicago area, and live recordings of them from this time are virtually nonexistent. Thus, this is a truly rare recording, and something that you won't find on any other blog, or anywhere else on the internet for that matter. This is my own recording, made from the original 1973 FM simulcast of the 'Made in Chicago' broadcast. Now, the quality is not that great, and that is only because, at the time (I was only fifteen and relatively new to the concept of stereo cassette taping) I was using lousy Memorex tapes (what did I know, they advertised on TV, and I had not yet learned that Maxell was the only worthy cassette tape out there), and the quality deterioration is notable. But, the tape with all its flaws has survived these nearly 40 years, so I was able to make a digital transfer of this unique concert event. The format of the 60 min show gave approx. 30 min to each act. Although the show was on public television, the FM simulcast was on a commercial radio station, so the show was divided into four roughly 12-14 min segments, with a commercial beak after each segment. And for this show, they split the acts over the segments. Aliotta, Haynes, & Jeremiah opened the show with the first segment, then they went to Bill Quateman for the next 2 segments, and closed the show with AHJ in the last segment. I have combined the segments from each artist for better flow. First up is AHJ.

Although not originally from Chicago, AHJ (Mitch Aliotta, Skip Haynes & John Jeremiah were a folk-rock trio that had played in and around the Chicago area for a couple years when they released Lake Shore Drive (on Bigfoot Records) in 1971. The single 'Lake Shore Drive', as well as the album, was an immediate success in Chicago, and the breezy style and spirit and honkytonk piano sound of this catchy road tune (an ode to Chicago's famous lakeside highway, with possible references to LSD, the drug) made it an instant Chicago classic. Sure, AHJ took some heat for the not too subtle drug references (intent consistently denied by the group, but bolstered by numerous other drug references on the album), but for most, that also was part of its appeal. Several other songs from the album also were quite notable and received substantial radio airplay, including 'Snow Queen' and 'For Eddie', further establishing AHJ as Chicago favorites at the time. Thus, when they made their appearance on Made in Chicago in the summer of 1972, they were at the height of their popularity. Apparently confident of their stature, they quite surprisingly chose to not even play their most famous song that night, instead going for a quite bold move of playing mostly unknown or previously unreleased songs. Only 2 of their 6 songs were from the LSD album, the other 4 being rarities that were not recorded for any album, including a cover of the Youngbloods 'Get Together' put in an extended medley with 'Some Old Engine' in AHJ's unique style, and 'Brooklyn Love Song', a comic theater piece (midwesterners making fun of New Yorkers) employing their penchant for 'cheap theatrics'. Thus, again, this was a unique show containing AHJ songs that cannot be found anywhere else. Because this was such a short set, and lacked the requisite Lake Shore Drive, I have added a sample of the studio LSD track at the end, just because it should be here, and so that those that are not familar with AHJ can hear their most famous song and how they are supposed to sound (in a better quality recording). So, without further ado, here they are, Aliotta Haynes & Jeremiah.

AHJ continued for several years after this, but never achieved comparable success as with LSD. But there has always remained interest in the group and this album. It was released on CD in 1992, with a couple additional tracks, and then was re-released in a 2-CD, 33-track special edition reissue for the 25th Anniversary (1996), called Lake Shore Drive at 25, which contained numerous additional AHJ tracks from various phases of their career. This enhanced version of the album is still available at Amazon and other outlets (at a very reasonable price BTW). Skip Haynes, in particular has remained active over the years and has continued to support his and the band's music.

Up next, the second part to this show, a great and unique set by singer-songwriter Bill Quateman
Posted by BBKron at 11:48 AM

Thank you for posting this! I had never had the opportunity to hear this recording, and very glad you preserved it for posterity!