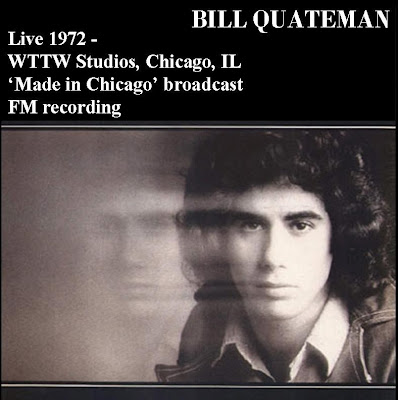 Note: Date was originally posted as being 1972, but has now been changed to 1973 after additional info surfaced - original broadcast date appears to have been April 11, 1973 (still unknown recording date).

Here is the second part of the same Made in Chicago show, featuring Bill Quateman. In 1972, Chicago singer-songwriter Bill Quateman appeared to be on the verge of becoming a major star. He was signed to Columbia Records and given special treatment by one of the most powerful men in music, Clive Davis (the man who signed Janis Joplin, Santana, Chicago, Billy Joel, Bruce Springsteen, and many others), given a crack production team, backing musicians (Elton John's sidemen - Davey Johnstone, Caleb Quaye, and Ray Cooper) and finances, and given full artistic freedom to make the album he wanted to make. The result, Quateman's debut album (1972), was nothing short of brilliant. An emotionally rich and powerful set of masterful songs ranging from energetic acoustic rock to soul-searching ballads delivered in a way that just seemed to personally connecting with people. The album received rave reviews and was considered one of the very best albums of the year. In Chicago, several songs from the album received radio play, with 'Only Love' and 'My Music' becoming local hits. Based on the positive reviews and strong word-of-mouth, the album sold over 100,000 units (not bad for a debut album from an unknown), but the single 'Only Love' stalled at around #78 on the national charts, and the album did not cause quite the sensation around the rest of the country that it did in Chicago. Personally, this is one of my favorite albums of all time, and was certainly one of my favorites all throughout the '70's. Quateman has a unique voice and vocal style, and writes and plays songs equally well on and for guitar and piano. But the real greatness is in the songs themselves, musically rivch and satisfying, but that also lyrically and emotionally tap into people's feelings with such poignancy, honesty, and sincerity. The songs became very personal to people that heard the album in ways that rarely happens. From the energetic drive and spirit of 'Get It Right On Out Here' and 'Only Love' to the beautiful introspection and personal depth of 'Circles', 'My Music, 'What Are You Looking For?, 'Keep Dreaming' and 'Only The Bears Are The Same', they are songs that just really seem to mean something to so many of those that heard them.

So, then what happened? How come I never heard of him you might be asking? Well, as Bill was in the process of making his follow-up album, Clive Davis was forced out of Columbia (in some misappropriation of funds scandal), and the new regime saw things quite differently. Gone was Bill's artistic freedom, and the new producer assigned to him wanted to change his sound and style to make him into the next Tony Orlando. Well, Bill refused. He wanted to release his second album the way he made it and intended. Columbia refused to release the album (but kept it) and dropped Bill from the label. Bill continued to play clubs in and around Chicago, but it was several years before another label would sign him. He did go on to make 3 solid, generally well-reviewed, but light-selling albums for RCA in the late '70's, but with more of a pop sound than his first album. After that, however, Bill decided to retire from the music business and devote himself full-time to raising his children. And he was quite satisfied with that decision and his life for the next several years. By the late '90's, as the internet took hold, people kept contacting him, asking about his music and where they could get his albums, was he still performing?, etc., and telling him how much his music had meant to them. So, Bill and his brother got together and set up a web site (billquateman.com), and they began selling Bill's albums on CD (the albums had been out of print for many years, and had never been available on CD before). He was even able to get back the rights to sell his never released 2nd album, making it available for the very first time (in 2000). Eventually he also began performing again, and released a new live album, Many Lives (2004), containing reworked versions of many of his classic songs, as well as some new ones, too. They were successful enough that another music distributor (IAM) eventually began distributing the albums to other music outlets, so now his albums (and digital downloads) are also available at Amazon, Itunes, itsaboutmusic.com, and other outlets (check out the comments on Amazon to see just how much people love that 1st album). So, that's the story.

Now, about this Made in Chicago show. As with AHJ, Bill plays quite a unique show, with multiple songs that are not available anywhere else. Bill plays the first segment (3 songs) all on guitar, featuring songs from his album, opening with the single 'Only Love', then the beautifully moving and heartfelt 'Circles', and finishing with the rousing acoustic rocker 'Get It Right On Out There'. For his second 3-song segment, Bill moves to the piano and plays 3 totally unknown songs, not available on any recordings at that time. The first is the emotional 'Rivers Go Rolling Home' which we now know was included on his 2nd album (but which wasn't released until 25 years later), then a wonderful song that is an ode to his Grandfather, which has never appeared anywhere else but on this show. For anyone that has enjoyed Quateman's music, this show is worth getting just for this song alone. Then Bill finishes up with the Gospel-tinged anthem 'God Bless Everybody', also not released or available on any other recording. As with the AHJ show, I have added a sample of a studio track at the end to give listeners a better idea of what a good quality recording of Quateman sounds like, and to feature one of the other standout tracks from the first album, a somewhat personal anthem of mine, 'My Music', with the refrain 'But it don't matter to me, because you see, I've got my music'. So, please, check it out and enjoy the one and only Bill Quateman, back in the days when he was young, fresh, and creating wonderful music.


By all means, check out billquateman.com, listen to music samples, and if you like what you hear, buy his music.
Posted by BBKron at 11:15 AM

i saw bill quateman (w/caleb quaye playing HOT guitar) at the aragon ballroom/brawlroom on a bill with mountain headlining their tour for their live 'twin peaks' disc. a total mismatch i'd think, but they absolutely won the crowd over.
i know that i must've already known the clive davis intrigues which sunk BQ's career, but BOY, did he get shafted.
i think i'll do a search for quateman, now that you've reminded me of him.
thanks!

THanks for posting. Was a big fan back in the day and saw many unbelievable shows at the 5th Peg. They were unbelievable, high energy, intimate. Knew about Bill being in CA and his recent work, but for years I have wondered what happened to Tommy and Sidney. Any ideas?