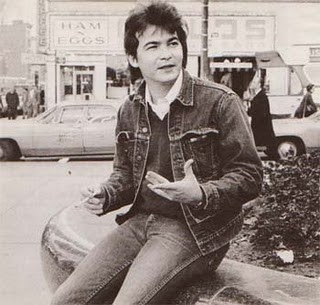 First up in my feature of influential Chicago artists is John Prine, one of the all-time great American songwriters and folk artists. Now, in recent years, towards the end of his career, he finally seems to be getting more of the respect, honors, and accolades he deserves as one of the best of all time (This year a new tribute album featuring young folk and rock artists was released, along with other awards, and international acclaim). But back in 1970, he was just getting started in Chicago clubs like the 5th Peg, The Quiet Knight, and the Earl of Old Town. Here are some of the earliest known recordings of Prine (in excellent quality), before he recorded his first album (1971). It's amazing that he already had written and was performing so many of his classic songs at this time (Sam Stone, Paradise, Hello In There, Angel From Montgomery, Spanish Pipedream, Donald and Lydia, Souvenirs, The Great Compromise, Illegal Smile, etc). By the time he made his first album in 1971 he already had enough great songs for 2 or 3 albums. And his first album was a masterpiece, with several more to follow. He has such a gift for so accurately and specifically depicting human problems and emotions with sincerity, honesty, and simple but brilliant turns of phrases that concisely sum things up with just a few words or sentences (The haunting and heartbreaking refrain from Sam Stone 'There's a hole in Daddy's arm where all the money goes...' is an excellent example). His songs are very personal, but always accessible, and sum up often unspoken feelings that we all can relate to. Although some of his songs deal with very serious issues and problems, they are handled with humor and grace, and are usually uplifting, and not at all depressing (Other songs are just funny and 'goofy' as he would say, but still express strong emotions and values). And although his voice may be rough and have a very limited range, it is perfectly suited to the music, and his simple but powerful presentation and style (including unique phrasing and ironic tone) make the songs come alive in ways that just don't happen when other artists (with better voices) cover the songs. And that has been one of his limitations, in that he is one of the world's great songwriters, yet his songs are not covered all that often, because he is the only one that really can do them justice (well accept for 'Angel' which sounds best with a female voice, like Bonnie Raitt's version). Although he has always garnered critical acclaim and a devoted following, he never really achieved widespread commercial success, which is such a shame, but really just fine with him. He is one of the most straight-forward, humble, unpretentious, and unassuming people you could ever meet. When he began writing his songs, he never expected anyone would ever hear them (or want to hear them), they were just made for his own entertainment. And he still goes about his craft that way.

This first show is said to be the oldest surviving John Prine recording. This show was recorded sometime in August 1970, labelled as 'John Prine Live at the 5th Peg 1970 WFMT Archives'. It was also around this time that John met another young singer-songwriter playing the Chicago clubs, a funny little guy named Steve Goodman. Steve would become his best friend, co-hort and collaborator, and it was through Steve that John was 'discovered' by Kris Kristofferson leading to his first recording contract. But more about Steve later. The second show presented is from a Studs Terkel radio show (songs and talk), and provides some very interesting talk and background on John and these early songs (such as 'The Frying Pan' was the very first song he wrote, at age 14). The info on the show states that it is from 01-07-1970, but this clearly is wrong, as in the interview they discuss his upcoming recording sessions for his first album for Atlantic, and he did not have a recording contract until sometime in 1971 (he hadn't even started performing at all until around mid-1970), so this session must be from 1971, and it would seem to be more like June or July rather than January, so I'm just calling it 1971. Whether you are a fan of Prine or not, If you are someone that is at all interested in American folk or roots music (or even just great songwriting), you have got to check out these early shows by John Prine. It just doesn't get any better than this. John Prine is a National Treasure. Next I'll put up a couple of shows from later in his career.

keep it up - thanks

So sad that this recording seems to no longer be available to listen to it. Saw John Prine play several times in Rockford IL in the early 70's! Would so enjoy hearing a recording from back then.

Be sad no more! All John Prine links have been updated and restored, so now all these shows are available once again. Enjoy!