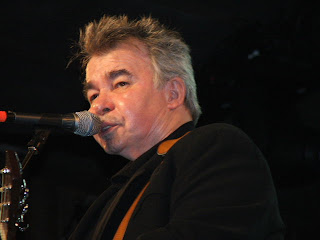 
I hope you all are enjoying these great John Prine shows as much as I am (although the lack of any comments on these makes me wonder). To finish up this mini-tribute to Chicago's folk icon, here is a show from his more recent years. This one, another excellent recording, is from his tour in support of Fair and Square, his 2005 grammy-winning album, which was also his first solo album of new songs since Lost Dogs and Mixed Blessings in 1995. In the intervening years, however, John survived a serious health scare. In 1998, a cancerous mass was found and removed from John's neck (along with a good chunk of his neck). That was followed by a couple months of radiation treatments. He took over a year off to rest and recuperate from the cancer and treatments, but was ready to start performing again by Spring 1999. After the surgery, his voice was noticably deeper, and a little rougher (more gravelly), but for a singer like John, it just gave his voice 'more character'. John has said that when he started performing again, he had to sing all his songs in a lower key, as he could no longer reach the notes he used to, and in re-learning the old songs in different keys, he achieved an all-new appreciation for some of his older stuff, and thoroughly enjoyed playing many songs he hadn't played in years. That difference in his voice can be heard in all his later concerts, including this one, and most fans have noted that the change in his voice fits right in with his songs and style, and just seems a natural progression into his later years. This show, then features a mixture of some of his old standards along with some of the newer songs, which show that he still has a knack and keen eye for writing gems. Some of the newer songs include 'Glory of True Love', 'Crazy as a Loon', 'Taking a Walk', and 'Some Humans Ain't Humans' from Fair and Square, as well as others like 'All the Best', 'Ain't Hurtin Nobody', and 'Lake Marie' from Lost Dogs. So here is John as he sounds in recent years (Still Great).

Also, I need to mention that there is a great official John Prine fan web site, http://www.jpshrine.org , that has all things Prine, including links to purchase his albums. Or you can go direct to John's record company site, Oh Boy Records to buy albums and DVDs from his catalog.

Coming up next, we go back to the early seventies Chicago folk scene to check out John's good buddy, the energetic, wonderful, influential singer-songwriter, and all-around great guy, Steve Goodman.
Posted by BBKron at 1:26 PM

This is to much. And soon to be followed by Mr. Goodman. The world is still agreat place to be when shit like this can happen.
Wonderful stuff. Thanks very much.
rockymustard.
P. S. Don't forget Jonathan Edwards and B. W. Stevenson.

Thanks for the Prine and the upcoming Goodman. Growing up in Chicago, I was fortunate to see the two of them together many, many times. At the Earl, junior colleges, Circle campus...Two of the greatest storytellers ever. It's still hard for many of us to listen to Stevie without getting teary-eyed.

So much good music came out of Chicago. Wonder if any good quality ROIO are around of either Mason Proffit or The Cryan Shames.

Thanks for this BB. I didn't have this Irish set and amongst the seemingly ever increasing Prine boots this is a beaut! Came here looking for John P and found the lovely Steve Goodman stuff too which is much appreciated.
More power to your elbow!