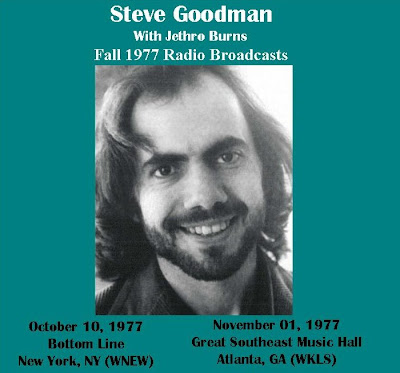 
Here's more from the great Chicago singer-songwriter, Steve Goodman, a combination of 2 radio broadcasts from the fall of 1977, with excellent sound quality. These shows also feature great mandolin playing from Jethro Burns (of country act Homer and Jethro), who regularly toured and performed with Goodman. Goodman does most of the show solo, then brings out Jethro for the last part of the set. I have combined these 2 shows to highlight the different songs from the sets, removed some repeated songs, and arranged them all into a relatively seamless longer single show. Highlights include another of his songs co-written with John Prine 'The 20th Century is Almost Over', his observations on sexual relationships - 'Men Who Love Women Who Love Men', and 'Moby Book', his condensation of Moby Dick into a blues song (or as he says, 'like Cliff Notes written by Willie Dixon' ). Enjoy.

Some more background on Steve. Right around the time Steve was just getting started as an entertainer, in 1969, he was diagnosed with Leukemia, which in those days was basically a death sentence. He didn't know how long he would have to live, but he dedicated himself to making the most of his career while he could. Only his close friends and family knew about his condition, so he went through his music career fighting back the disease as best he could, with his fans and public not knowing anything about his ailment. That he was able to keep up such an upbeat attitude, high energy, and good humor, and be such a prolific songwriter and performer throughout his career was an amazing achievement. By 1983, however, the cancer was really taking it's toll, and Steve finally revealed to the world his condition. Steve died in September 1984, but left behind a rich legacy of songs, albums, and performances. Next time I'll feature some shows from his last few years. Till then, enjoy this small glimpse of a wonderful performer and great guy, Steve Goodman.

This find with Jethro Burns is excellent as is the show.