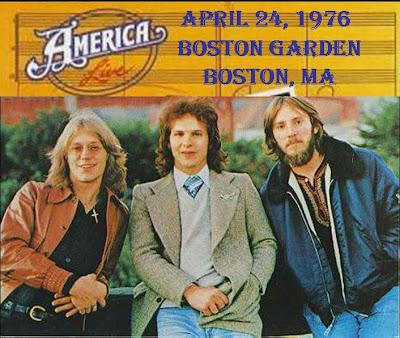 Here's another America show, from a bit later in their career (past their early peak years), but still while all 3 original members were present and the live shows were solid. This show starts out great, featuring several of their early classic songs, but then lags considerably in the second half, when they play songs from their then-current album, the relatively lackluster Hideaway ('Jet Boy Blue'?!, 'She's a Liar'?, 'Don't Let it Get You Down'?), before finishing strong with rousing versions of 'Horse', 'Golden Hair', and 'Sandman'. To make up for some of the lamer songs included, I have added a handful of excellent and rarely played earlier album tracks from a 1978 KBFH show (featuring a couple from Hat Trick, a couple from Homecoming, and a rousing 'Here' to finish it off). Feel free to replace the Hideaway tracks with these, or just keep them here at the end (they add some much needed oomph to round out the show). Anyway, here's more America.

thanks for this one it's looks like a great one for sure...
I made a back cover it can I send you it?

Hello
Thank you for the fantastic job on this blog
Can you re-umpload this one ?