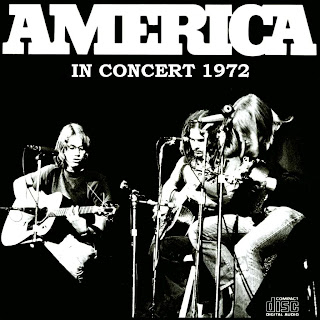 I am a huge fan of the early years of the band America (mainly 1971-1974). Their first 3 albums are all great, and their first album, in particular, is one of my top ten all-time favorites. When the trio of Dewey Bunnell, Gerry Beckley, and Dan Peek, who were all kids of career U.S. military personnel stationed at an Air Force Base near London, became a band they took the name of the homeland they barely knew, America. When they burst on the American music scene in 1972 with their scintillating acoustic guitar interplay, strong songwriting, amazing harmony vocals, and their brilliant debut album (America, 1971), I was mesmerized. Buoyed by the hit singles, ‘Horse with No Name’ and ‘I Need You’, the album also became a #1 Hit (ironically, the singles are actually among the weakest tracks on the album – the very best songs, such as ‘Rainy Day’, ‘Donkey Jaw’, ‘Here’, ‘Never Found the Time’, ‘Riverside’, etc. were rarely heard either on radio, or in concert from these guys). They followed this up with the almost equally strong Homecoming (1972), featuring the excellent ‘Ventura Highway’, ‘To Each His Own’, and ‘Only In Your Heart’, among others. Next came the also very good, but very under-appreciated album Hat Trick (1973). Hat Trick produced no hits (only the regrettable single ‘Muskrat Love’) and did not sell nearly as well as the previous albums, but was a very solid album, their most versatile and ambitious to date. Perhaps because of the relative failure of Hat Trick, the group, who had self-produced both Homecoming and Hat Trick, decided to bring in a well-known producer for their next album, the legendary George Martin, of Beatles fame. Although this union was highly successful (at least at first), resulting in smash hits like ‘Tin Man’, ‘Lonely People’, ‘Daisy Jane’, and ‘Sister Golden Hair’ over the next couple albums, I still believe the group lost their way when they teamed up with George Martin in 1974. George made them into a much more slick, highly polished maker of hit pop records, and the scruffy trio with the shimmering acoustic guitars, stellar vocal harmonies, and somewhat rough-around-the-edges recording style was effectively gone for good. Their sound was never the same again, giving way to studio musicians, slick arrangements, lush orchestration, and layers of sound. By 1977, their songs had become increasingly tired and lackluster. Then Dan Peek left, which as far as I’m concerned ended the group (No disrespect to Dewey and Gerry, who continued on as America, but without all 3 voices, songs, and guitars together, it is just not America). Anyway, I still love those early seventies years of America. Unfortunately, there are almost no available live recordings from those years, either official or unofficial. Most of the available concerts come from the later years, after Dan had left. There are a few shows from the Martin years with all three present (1975-1977), but not many. I would love to find some shows from around 1973 (which is when I first saw them), when they were featuring songs from all of their first 3 albums, but alas, there are none I know of. However, I have found this one boot from 1972, featuring a couple of short radio shows of the original group performing just with their acoustic guitars and vocals. This was just after Homecoming was released, and in addition to songs from the first 2 albums, this also features some never released songs and an Arlo Guthrie cover. Unfortunately, the short sets are very similar, thus there are 5 songs that are repeated between the 2 shows. Also, although these are from radio broadcasts, the initial recordings I had were pretty good, but not that great (somewhat muddy sound, guitar leads not clear, minor speed fluctuations). Fortunately, more recently, alternate, much improved recordings of these broadcasts have become available. So, now, I am able to offer these improved upgraded versions of these shows, in both lossless and upgraded mp3 (320) (Originally, I only had these available as 192 kbps files). As far as I know these are among the only recordings of the group from this period (along with the longer 1972 Philly show, also available here), so it is quite precious and wonderful to hear.

actually the amsterdasm show,was taped in bergen,near alkmaar in the orth of holland, i know because I was there,and if you want i can post the whole show which i taped.

Shaded pardon,
Thanks for the info, and I would LOVE to get the whole show from this, or any other early seventies AMERICA concert. If you can post it or send it to me (email:blark1056@yahoo.com), that would be great! thanks!

i will rip it and send it to you, prolly tomorrow

here is my copy, it turned out that i saved the same radio show as you,my original recording is too detiorated ,bummer
anyway here is the show

Any chance to hear the whole America show from Holland here? Thanks so much for the two gems posted here!

the holland show is what is posted here, nothing more

I just wondered if it was possible for someone to provide a link for the full America Boston 5/4/75 concert.
Best wishes

I just wondered if someone could provide a link for the full: America Boston 5/4/75 concert.
Best wishes

Just heard about Dan Peek's death. So sad. I think he was the most talented songwriter of the group, and they were never the same after he left. I had still been hoping that all three would reunite for a series of concerts someday, but sadly that never happened. Dan Peek , you will be missed, but your contributions to music live on.

Ged (and all others interested), here is a link for the 5/4/75 Boston show (not my link, but courtesy of Midnite Cafe):
http://www.megaupload.com/?d=5T7MG0G4

Yes, it's really sad news about Dan Peek, he will be missed and as you say his music will live on.
I too think America's best 3 albums are the first 3, with Dan very much to the fore. Ironically some reviews of America credit George Martin for their success when of course he wasn't around for the first 3 albums. Early America and the early Doobie Brothers were always my favourite 2 groups. They were strangely compatible even though one was rockier than the other.
Thanks very much for the link and it's a very enjoyable concert.

Hi! This looks so good. May I please request a re-up of the download? Sadly the hotfile link is dead. I'd love to hear it!