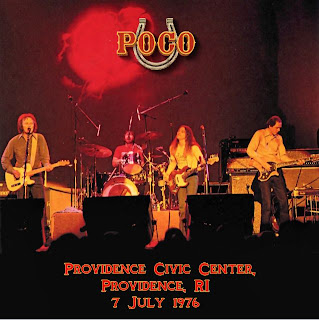 In going back through the blog, I noticed that it has been over a year since I posted any Neil Young, which was quite surprising, and that needed to be corrected. So, I decided to post a show from the brief tour of the Stills-Young Band in 1976, and of the available shows, the show from Providence, which has only recently become available as a high quality master recording from renowned taper Dan Lampinski, was by far the best quality. And with that show came a bonus, the complete set of the opening act, Poco. And as anyone who enjoys this band knows, there seem to be very few available recorded shows from this fine band. In addition, Poco happens to fit in well with last month's theme of great, underappreciated bands (as well as being the third band in row I've posted that starts with the letter 'P'). So, this is the first of a 2-part post from the concert on July 7, 1976, featuring Poco as opening act, and then the main set from the Stills-Young Band. Poco, is another great band that never really seemed to get over that hump that separates a fine critically-successful band with a strong cult following from the widespread acclaim and commercial sales of the most successful bands. There's no question that Poco was one of the pioneers and originators of the country-rock sound and style that became popular in the seventies, mixing a driving rock sound with the more traditional instrumentation and quality pickin' (pedal steel guitar, dobro, banjo, etc.) and harmony vocals of bluegrass and country, and throughout the years they remained one of the very best. Originally formed in 1968 by Richie Furay and Jim Messina after the demise of Buffalo Springfield, they never achieved the success of their former bandmates, Stlls and Young, nor that of later bands they inspired, such as the Eagles. Perhaps, they were a bit too country for most rockers in those days. Whereas most of the more successful bands turned to a more pop sound, Poco retained more of that countrified feel throughout the '70's. One problem Poco had was the lineup seemed to be constantly changing. Original bassist Randy Meisner left after 1 album (later to become a founding member of the Eagles). Messina left after the 2nd album, and Furay himself also left in 1973 (after 5 albums). However the primary core of the group through those '70's years was fairly constant, with Rusty Young (guitar, dobro, banjo, pedal steel, mandolin, etc), Paul Cotten (guitar), Timothy B. Schmit (bass), and George Grantham (drums) all being with the band from 1970-1977. Tim Schmit then left the band in 1978 to replace Meisner in the Eagles (Ironically, Schmit had originally replaced Meisner in Poco, then left Poco to replace Meisner in the Eagles, and only then becoming 'famous'). Poco always seemed to be the minor leagues relative to the 'major league' acts of the Eagles, CSN, etc.). However, their music was just as good (or better) than any of those other acts for most of those years. Anyway, so here they are opening for Stills-Young in 1976. This was after Furay had left, but still with the core lineup of Young, Cotten, Schmit, and Grantham, and during a particularly productive period. BTW, the band continued (in a somewhat different form) through the '80's, and has gotten back together at various times (and in various forms). There is still a version of the band touring today. This band also is one of those that seems to have gotten much more respect in retrospect than they ever got when they were around the first time, being the subject of numerous compilations, re-issues, and 'best of' collections.

I was at this show : both bands were really good. Poco missed Richie, but they were still pretty good. Al Garth was with them too for this tour.


(please disregard previous comment, as I forgot to mention Al Garth ) thanks


There are certain point in our life that we encounter failure but it doesn't mean you will
lose hope and give up everything but it only means that every failure there's an
exchange and that is new beginning. Well, thank you for sharing your article and
keep on posting. Visit my site too for more information.

Every accomplishment starts with the decision to try. Keep sharing ideas. Have a good day :)
imarksweb.net
imarksweb.net

I was at thus concert. Floor seats and about 20 rows back. I took some pretty good B&W photographs.