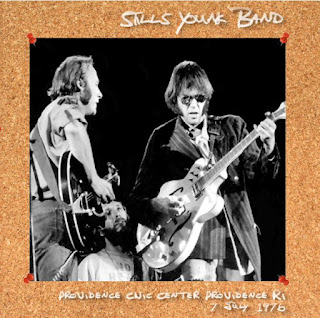 OK, here's the second part of the 7/7/76 post, the headline act, the Stills-Young Band. The Stills-Young Band consisted of Neil Young, Stephen Stills, and several of the members of Stills' former band Manassas, and represented a very brief reunion of Young and Stills. The pairing seemed odd at the time, since it was usually the friction between Young and Stills that ended their previous collaborations, from Buffalo Springfield to CSNY. Young has said that the reason he joined up with Stills again at that time was that he wanted to return to some of the interesting guitar explorations and interplay the two of them created in Buffalo Springfield. However, perhaps not surprisingly, the reunion was briefer than expected, because after quickly recording their only album as a band and setting off on tour, Young apparently tired of the group and just left in the middle of the tour, notoriously sending Stills a telegram saying he was gone and not coming back. Stills and band continued the tour without Young. Overall, 1976 was a very interesting and productive year for Young. In the early part of the year Young had a highly successful tour of Japan and Europe with Crazy Horse, and according to many fans those Japan shows rank among his very best. Then he returned to record with Stills, and they set out on tour months before the album was released. By the time the album was released in September, the band was already defunct. Several places have reported that Young only played on 8 dates of the tour, but that is wrong, he played on 19 dates before leaving, about half of the planned tour. In between and around all this, Young was also writing and recording some of his most memorable tunes around this time, many of which would not be released for some years, including 'Pocahontas', 'Like a Hurricane', 'Powderfinger', 'Too Far Gone', and several others (many were part of the great unreleased album, Chrome Dreams). Later in the year, Neil toured again with Crazy Horse, and then finished his concert year on Thanksgiving on stage with The Band for 'The Last Waltz'. As for the Stills-Young performances, they were interesting, and Young was at the top of his game (not as much for Stills) but even at this fairly early stage of the tour, there seems to be little interaction between Stills and Young, with there being a clear separation between the Stills songs and the Young songs. Those who were at the shows said they were rarely even onstage together. The performance, however, is quite good overall, but why they chose to sing Suite:Judy Blue Eyes without Crosby or Nash present is very strange (it is downright painful to hear Young and Stills trying to sing the harmony vocals). Nonetheless, it is another unique and interesting chapter in Neil Young's strange career. (BTW, all Young fans should already have Chrome Dreams and some of the 1976 Japan shows, which are available on several other blogs - only reason I haven't posted them here).

Cool! These shows aren't a high point for Young or Stills, but they're still fun to hear. I'm doing my own little Neil Young 1976 retrospective over here currently: http://doomandgloomfromthetomb.tumblr.com
Keep up the great work!

I saw the tour at the Capital Center in Landover, MD...I recall a fantastic show...being huge fans of each and a little tequilla probably helped!
Thanks for posting!!

Caught them in Detroit. A GREAT show.