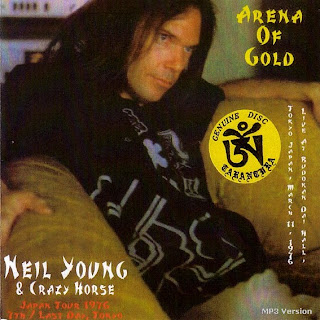 Ok, to wrap up this set of Neil Young posts, I decided to go ahead and post one of the 1976 Japan shows, because in checking, they don't seem to be as widely available as I previously thought, even though a few have been featured on some other blogs. Although no soundboard recordings have surfaced from these shows (Perhaps Neil is still holding these for future release in the Archives series?), this is one of the best audience recordings of these Japan shows, the final night in Tokyo, at Budokan Hall. As was the composition of Young’s shows at the time, the first set was solo Neil Young with acoustic guitar or piano. And as usual, he unveiled several 'new' songs on this tour, including 'Too Far Gone', 'Let It Shine', 'Lotta Love', and 'No One Seems to Know'. The second (electric) set brought on Crazy Horse, and featured the first live versions of the recently released Zuma classics 'Like a Hurricane', 'Cortez the Killer', and 'Drive Back' , as well as searing versions of 'Southern Man', 'Cowgirl in the Sand', 'Cinnamon Girl', and others. It is a delight to hear this period of Young’s career when there is such a sense of tension, freshness, surprise and a certain desperation to these songs.

FYI: A Lossless (FLAC) version of the show from the same venue but the previous night (3-10-76) is available at Quality Bootz here.
Posted by BBKron at 1:38 PM

The first link is down.