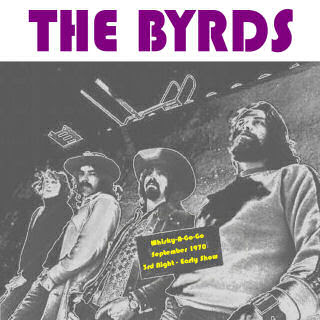 Here is a companion to the previously offered combined performance by the Byrds and Flying Burrito Brothers, that constituted the late show on this final night of a memorable run at the Whisky in 1970. This is The Byrds set from the early show, and shows them in very fine form doing a relatively short set (due to the double bill with FBB), but packed with classic tracks and great performances. As noted previously, this was just at the time of the release of Untitled, their popular combined studio/live double album. When taken in conjunction with the highly adventurous late show, also available on this blog and which was essentially a loose jam session with their friends in The Flying Burrito Brothers, this concert helps to complete the picture of this memorable night (although I have not heard of any tape from the FBB early show being available). Once again (as with the last one), this show comes courtesy of Rocking-Byrd and his blog, so much thanks to him for making these available.

Love the 2 Byrds posts! Glad to see you are still posting shows despite all the craziness with file sharing!

Speedy at So many Roads
http://so-many-roads-boots.blogspot.com/