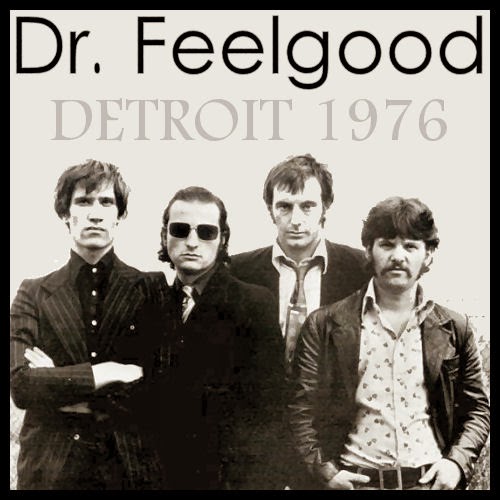 Although bands like Rockpile and Graham Parker & The Rumour emerged from the Pub Rock scene with greater success and international acclaim, the band that probably most exemplified what the Pub Rock Movement was all about, and carried the banner most proudly, the 'Poster Child' of Pub Rock, if you will, was probably Dr. Feelgood. Dr. Feelgood was a hard-driving  distinctively British R & B band out of Canvey Island, Essex, formed in 1971. Lead by their vocalist, Lee Brilleaux, and guitarist Wilko Johnson, Dr. Feelgood developed a frantic, gritty act with a rough and ruthless edge. Their distinctive sound and style, with Johnson's jerky movements and choppy, percussive guitar style, Brilleaux's raucous vocals and harmonica, and their dark, shabby, unkempt suits, they personified the look, sound, and attitude of Pub Rock. By 1974, they were one of the leaders of the Pub Rock movement and were getting more notice and acclaim. They released their first studio albums (Down By The Jetty-1974, Malpractice-1975) at this time, but didn't make it really big until the release of their next, a live album (Stupidity-1976), which, being live, captured the full appeal of the band better than their studio efforts, and went all the way to #1 in the UK. However, their success never translated to the US. Despite attempts to release Malpractice, Stupidity, and their 4th album (Sneakin Suspicion-1977) in the US, as well as a brief tour there in 1976, they just never caught on with American audiences (or radio programmers), and no further albums were ever released in the US. Dr. Feelgood is also credited with being a strong influence on the next phase in the British Rock scene, Punk Rock, as they already had the attitude that would carry forward. However, after 1977, and disputes over their 4th album, guitarist Wilko Johnson left the band, and they would never be the same again, nor achieve the same level of popularity. And by this time, Punk was becoming all the rage and stole much of the thunder from Pub Rock, and the pub rock movement (and bands) faded. Dr. Feelgood did carry on, however, first with Gypie Mayo on guitar, who brought his own unique style, then others. Lee Brilleaux continued with the band until his untimely death due to cancer in 1994. but even after that, upon the wishes of Lee himself, the band continued on again (although now without any original members) throughout the nineties and beyond, and has continued on to this day, being a very active, touring pub band. Wilko Johnson continued in several diferent bands over the years (most notably w/Ian Dury & the Blockheads and the Wilko Johnson Band), but has never gone back to Dr. Feelgood. Here is a show from their very limited American tour in 1976, which shows them in a much more subdued state then their normal high-energy antics (they were probably advised to tone things down for the American audience). So, it is not really a typical show for this period, but it does show off their music and musical abilities as a rockin' bluesy R & B band (It seems that there were very few recordings actually made at the various Pubs during this Pub Rock scene, so many of the recordings that are available for all these bands are from more formal concerts and US shows). Interestingly, for this show, they opened for Starcastle and Journey, which, ironically, are just the type of bands (Prog rock, glam, slick, overproduced sound) that the pub rock movement (and Dr. Feelgood) were reacting to and rebelling against (perhaps, then, it is not surprising that this type of audience didn't exactly embrace them).

Note: Opening set in support of Starcastle and Journey for what was their first and only American tour (promoting their 2nd album, Malpractice).

the file has gone, any change of a re-up?

Sure thing, Rob. Link has been updated. Rock On.