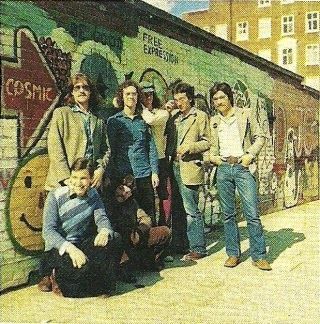 OK, I had to include this one last Pub Rock entry, to follow-up on the Flip City post from last week. As already explained, Flip City was Elvis' early pre-Costello band that played on the pub rock circuit. Although they never had any records officially released, they did make it into a recording studio on three separate occasions, which are documented here. So, here we have their only recorded output, which includes several MacManus originals (both early versions of songs that would later be recorded by Elvis and songs that would never be released in any form) and fascinating covers (such as 'Knockin On Heaven's Door', 'Third Rate Romance', 'You Win Again'). Thus, this is a unique treasure trove for all Elvis fans, with a compelling look at his early works and songwriting, all in very good audio quality (unlike the previous live recording with only so-so audio quality). Incidentally, this recording of 'Third Rate Romance' was planned to be released as Flip City's first single, but unfortunately, it never happened, and by the end of 1975, Flip City called it quits. Of course, thankfully, that also allowed Declan to later be re-discovered and re-born as Elvis Costello.

Thank you for this after seeing the previous Flip city post I really wanted to hear it so did a www search and only found dead links and dead ends I was gone for a week came back and ka-blam here it was thanks again.
tonyb

Thanks for Flip City and the other Pub Rockers. In the event that you have anything new, would you consider revisiting Gene Clark, Chris Hillman, Firefall. I really enjoyed that trip and would like to take another :)

Many thanks for the two Flip City posts. I really enjoy leaning about the way artists got their start. I'm going to see Elvis solo Monday with a friend who's a huge fan. I'll make sure to pass him a copy of these demos. Nice to have this in such great sound quality. Thanks again - love your site!

THANKS ALOT FOR SHARING

Mich Kent the bass player lived in South Wimbledon, London, UK. at the same residence as I sharing a flat. I went to most of their gigs and went together often with Flip City to their mates in other groups such as Bees Make Honey, Brinsley Schwartz and Kilbourn and the High Roads.