The Who - This Old Lifehouse-The Bootleg Reconstruction Project ver. 2.0 (Updated) 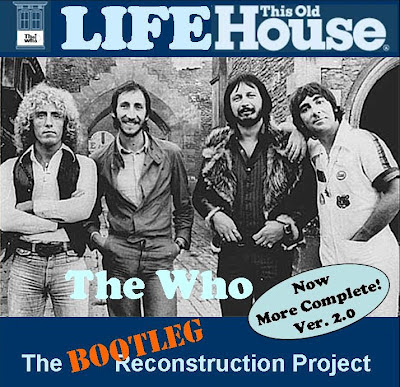 Here, finally, is the return of what was probably my most ambitious project for this blog, my Lifehouse compilation, and now it is even updated and improved, containing additional songs not included in the earlier version. I put this together more than 3 years ago, to gather together all the various songs  that were written for or originally intended for inclusion in the Who's epic, but abandoned, 1971 project, Lifehouse, because, quite surprising, this compilation was not available anywhere else (see additional notes regarding earlier compilation from original post here). It was finished and posted to the blog in fall 2009, where it has been available ever since (up until it was deleted in the megaupload debacle). But I waited to re-upload it, because I wanted to update it with songs that were not available when I first put it together. It always bothered me that I could not find unofficial versions to include for all of the songs, and thus had to leave some off ('Teenage Wasteland', 'Going Mobile', and 'Put the Money Down'). For those songs, the only available versions were Pete Townshend's original demo recordings, which at the time had been commercially released by Pete as part of his 'Lifehouse Chronicles' box set (on Pete's eelpie records, eelpie.com), so I did not think it was appropriate to include in my compilation, even though bootleg versions of the demos had been available for years. However, shortly after I put the collection together, Lifehouse Chronicles was deleted from production and was no longer available commercially, and Townshend's demo recordings have not been available at any time for these past 3 years. So, I decided to go ahead and include the bootleg versions of Pete's demos for some of the missing songs. In addition, over the past couple years, Roger Daltrey has begun including 'Going Mobile' in his live shows (and also acknowledged that this song was never played live by the Who), so I have now included Roger's live version in the compilation. So, now here it is, ver. 2.0, which is now complete, and includes versions of ALL the songs that I think should be in this compilation. I have also included Pete's demo version of 'Time is Passing' as a bonus track, which could be substituted for the live track used here (which is of poor recording quality), if desired.

Compiled by BBKron exclusively for The BB Chronicles (http://bbchron.blogspot.com). This compilation gathers together unofficial recordings of songs originally intended for the Who’s abandoned Lifehouse project. All tracks have been previously available from various bootleg sources.

Note: There are a few differences netween the mp3 and Flac versions of the compilation. The Flac version contains Pete's demo recording for 'Going Mobile' and 'Mary' instead of the live tracks included in the mp3 version due to the lack of availability of lossless sources for those tracks.

Additional note (for those wishing to burn to CD): With the addition of the extra tracks, disc 2 is now a bit too long to fit on a single CD. For burning purposes, one song (4 min or greater) will need to be removed from the collection in order to fit on 2 CDs (your choice). But this is the complete collection

Congatulations for your perseverence on posting stuff after the mediafire downfall

Thank you so much!It's a gift to me and all the other followers.God bless you!

Hi BB just thought I would say how much I have enjoyed this recreation. managing to find some better quality replacement tracks (eg track 2 CD one is on youtube as a studio stereo recreation from an old bootleg). Some of the live tracks are killers. I would love to find these some where. Track 16 live in Frisco 73 is knock-out. Many thanks.

man this is great. Look what the fans have made over the years with the Beach Boys' Smile and look at the finally released version: it's all so similar! Your work is truly appreciated by the real fans.

BB, where can I get a copy of this CD?

Since this is a collection that I put together myself, it is not available anywhere else, and certainly not on CD. But, you can make your own CD of this using the FLAC file version. Just download it and burn to CD using Winamp or another program that can handle FLAC files.

Thanks BB for ALL you do UPLOADING/DOWNLOADING & listing ALL those TRAX! If I could pass this "MaryJane"(P>T>Baba,baba,baba track!)through the ENDLESS WIRE...Cheers!,H.P.>>>>>>>>>>>>>See You At #TheWhoHits50Tour2015

Thank you so VERY much, always. <3