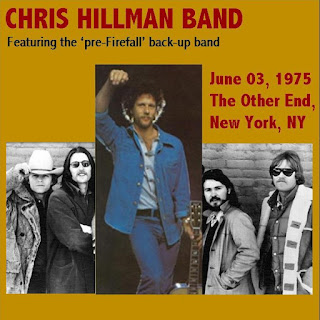 Here again, is the remarkable Chris Hillman, from the tour immediately following the break-up of the Souther Hillman Furay band in 1975. Chris got together with old friend Rick Roberts and members of Rick's 'new' band, tentatively called Firefall, which had begun rehearsing together but had not yet recorded or performed as a group. This was the same gig, at New York's The Other End (aka The Bitter End), where just a few days later, Firefall would be 'discovered' and offered their record contract, after Chris Hillman became ill and had to bow out of the tour and Firefall continued several shows without him, featuring their new band and songs (That first Firefall show 1975-06-06 was previously featured here). Here though we have a show prior to that day, when Chris was apparently healthy, still very much in charge, and ably leading and running the show, which features a great selection of songs from throughout his career at that point (Byrds, Burrito Bros. SHF Band, etc.) with notable and expert back-up provided by the Firefall guys.
This recording was provided to me once again by our own David M. Although he did not personally tape this one, he received it many years ago from the taper, and it has been in only very limited circulation since then. Enjoy.

BB & David M, thanks so much for sharing this Chris Hillman Band show. It is a nice compliment to the previous Firefall post. Any chance there are any Gene Clark or FBB shows in your collection that can be posted. They have both been on my mind and stereo lately with the anniversary of Gene Clark's passing as well as Chris Ethridge and Doug Dillard's recent departures to the great beyond. If no, not a problem. You both have shared so much great music with us all and we are in your debt. Thanks!

Thanks a lot. The drummer's family name only takes one "t" by the way - it's Wooten.

Thanks so much for this one.