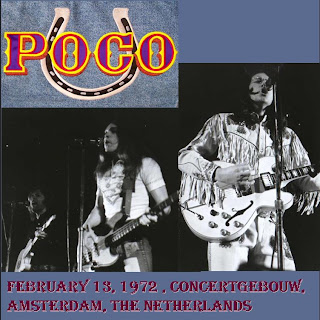 Richie Furay formed Poco in 1968 during the collapse of Buffalo Springfiield (taking along Jim Messina and ace pedal steel session musician Rusty Young), and although Furay lead Poco for about five years and through their first 6 albums (leaving in late 1973), there are relatively few available live recordings from Furay's years with the band. This is one of the few I know of, from 1972. Fortunately, it is very good quality, but frustratingly short (probably an opening set for another headlining band). Although Poco is now acknowledged as one of the premier and seminal country-rock bands, they never became very popular in their day (no hit singles, weak album sales, not headlining tours). One of the primary reasons Furay left the band was his frustration with their lack of commercial success and inability to build up bigger audiences. In 1972 & 1973, even after critical acclaim and 6 albums, they were still primarily an opening act for other, bigger bands (This was especially crushing for Furay because of the much greater successes of his former bandmates, i.e. Neil Young, Crosby, Stills, & Nash, Loggins& Messina, etc). Surely, one of the great neglected and underappreciated bands, Poco produced much classic and quality music, but it seemed the general public was not quite ready for their hard mixture of country and rock at the time. Although the band did see some greater success (a couple hit singles, at least) a few years after Furay left, they still never quite broke through to the extent they deserved. Furay, as we know, left to join what seemed to be a 'Can't Miss' opportunity, forming the new country-rock 'supergroup' the Souther-Hillman-Furay Band, which ironically, didn't fare much better than Poco did (and were much more short-lived), but that's another story (which we have covered here previously). If we just concentrate on the music, however, Poco was, and is, a great band, and this is a fine show from those earlier Furay days of the band.

Thanks to Infinite Fool (infinitefool.blogspot.com) for providing this show!

thanks for the poco post. thanks for your blog. Thanks for keepin' on.

Once more, we appreciate your efforts to post these unique shows.

The Band America performed first. Each band played about an hour. Was a great concert.