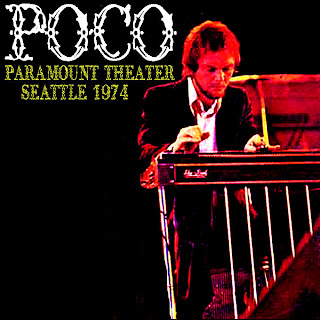 Here's more Poco, from the next stage of their career. Following Ritchie Furay's departure in late 1973, Poco continued as a quartet, deciding not to add anyone to replace Furay. This meant that the rest of the band members had to really step-up to fill the shoes of someone who lead the band, was their strongest vocalist, and was one of the main songwriters. Fortunately, that's exactly what happened, with Rusty Young and Timothy B. Schmit taking on much larger roles, partnering with Paul Cotton as a triumvirate of singing, songwriting, and performing talent. Rusty, in particular, had primarily only been the multi-dimensional guitarist (pedal steel, banjo, Dobro, mandolin, etc.) up to that point, and not actively involved in singing or songwriting. Fortunately, he has a fine singing voice (which allowed them to continue to feature their 3- and 4-part harmony vocals without missing a beat), and also was an accomplished songwriter, too, contributing many fine songs to their repertoire. This quartet lineup also gave the group some much-needed stability. After 4 lineup changes in their first 3 years, this core quartet group remained intact for several more years (from 1973-1978, until Schmit left to join the Eagles). This period became the most stable and arguably most productive period of the band, as well as produced some of their best albums (5 solid albums in 4 years: Seven, Contamos, Head Over Heels, Indian Summer, and Rose of Cimarron), alas, still without much mainstream commercial success. The show featured here is from the 1974 tour in support of Seven, and it has very good sound quality, and is a fine example of how well Poco carried on without Ritchie Furay .

And thanks for this one too. Hotfile is fine, even for a free user with a little patience. Thanks for taking the time to repost.