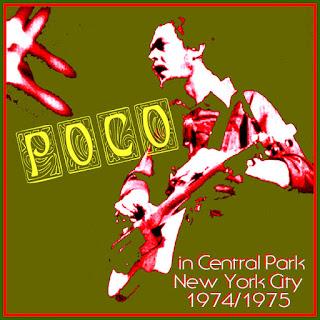 
More Poco from this middle period, about a year later than the previous post. In addition to the previous repertoire, this one adds songs from their 2 most recent albums at the time, Contamos and Head Over Heels, featuring among others, Tim Schmit's superb harmony anthem 'Keep On Tryin'. As noted previously, this solid quartet format lasted for a couple more albums and tours, until Tim B. Schmit left to join the Eagles at the end of 1977 (ironically, to replace Randy Meisner, again, as Schmit also originally joined Poco to replace Randy Meisner). After that, things got a bit strange for Poco. Stunned by the departure of Schmit and facing the cancellation of the release of their next album by their record company (a planned live album), the group decided to take a break. In that time Paul Cotton and Rusty Young formed a new band, tentatively called the Cotton-Young Band, adding Brits Charlie Harrison (bass, backing vocals) and Steve Chapman (drums), and focusing their music on a more pop-oriented sound. As they began to record tracks for an album, their record company liked what they heard, but wanted to release the album under the Poco name, so they did. Unfortunately, this left George Grantham out of the group, without him ever quitting or the band firing him, as the new lineup was formed and continued without him. Perhaps not surprisingly, with the more pop, and less country sound, the 'new' Poco became much more succesful than ever before, with the new album Legend (1978), producing the group's first 2 legitimate hit singles ('Crazy Love' and 'Heart of the Night') and a top 20 hit album. Poco has continued with various lineups (including reunions of the original lineup and various other guest appearances by Furay, Meisner, and Messina) over the years and is still active today (although Rusty Young is the only original member in the current incarnation, longtime member Paul Cotton remained in the band until 2010). Even with all the lineup changes over the years, Rusty Young has played on every Poco album, and has played in every Poco gig, from the beginning.

Thanks for the Poco shows. The link works great for me.