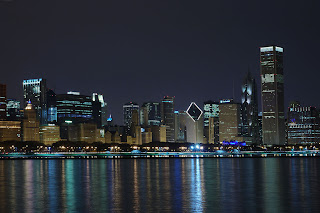 I grew up in the western suburbs around Chicago, IL. Where we lived was far enough out that it was still fairly rural and kind of out in the sticks (not at all the neat suburban developments that come to mind), and it was a good hour's drive to get to the city. I was thirteen in the summer of 1970, and transitioning from junior high to high school. This was around the time my musical development really took off, as I was exposed to and listening to more different kinds of music (and coming into the time when I could start buying my own records, stereo, etc.) throughout the early '70's. This was when FM radio (and the developing AOR style) was still very diverse, progressive, and exploratory, and really featured whole albums and across the board styles (WXRT, in particular comes to mind). For the next few weeks, I will be featuring artists that were very important to me in my musical development. More specifically, these were all artists that I grew up hearing and hearing about in and around the Chicago area in the early-mid 1970's. These were primarily local artists (many of which shortly became famous nationally and internationally as well), but I will focus on their Chicago days. Chicago had a rich history and tradition of music, from folk, pop and rock bands, to jazz and blues. Now, I have to admit that as a young teenager I was not into (or even aware of) the jazz and blues scene that Chicago is well-known for. Later, of course I came to know and appreciate that style of music, but at that time, I was a teenager and totally unaware or uninterested in it. So, I will not be featuring that aspect of Chicago music and artists, as it was not a part of my world then. But I will feature several of the Chicago folk and rock artists of that time that were important to me (wherever possible that is, as some did not go on to great success and few or no recordings are available). So, anyway, stay tuned for 'Made in Chicago, the BB Chronicles version'.
Posted by BBKron at 12:40 PM

Looking forward to it. I spent three years living in Lombard (which wasn't the sticks while I was there).