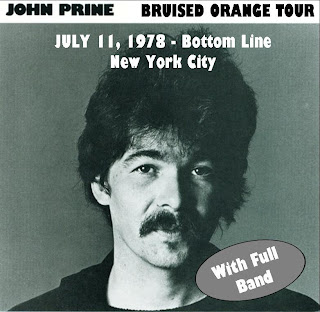 
Here is a show from Prine several years later in his career. This tour was in support of Bruised Orange (1978), his 5th studio album, so, we get the additional songs from this period. In addition, this tour featured a full back-up band with Prine, including additional guitars (both electric and acoustic), keyboards, bass, drums, and back-up vocals, rather than Prine's more traditional solo act or just with guitar and bass. At this time Prine was exploring more of a harder edge and rock sound on several songs, which would be even more prominent on his next album, Pink Cadillac (1979). Here, he already has the band assembled that he would use for most of Pink Cadillac, and it is interesting to hear some of his songs done with a band (and electric guitar?), although he does go back to just himself and guitar for some of the classic tracks that work better that way. But whether you like the fuller sound and arrangements, or prefer just John alone, this represents the next phase of his illustrious career, and it's all great stuff.

Our student government at my college booked Prine and this band to play during this tour.
What a fantastic show it was!
For the careful listener Prine added a new verse to "Saddle in the Rain", performed here.
I worked this show and met him backstage, he's a little shy off-stage but very nice.
When I asked him about that extra verse, he said it was in the original song but it cut out during recording. He wrote the lyrics to it on a note pad and autographed it to me. I still have that page 33 years later. Thanks for this!