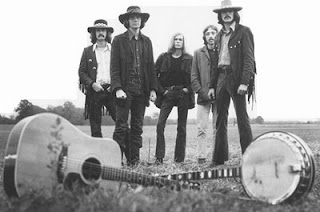 Continuing with my series of great Chicago artists from the early 1970's, here is Mason Proffit. Formed by Terry Talbot with his brother John Michael Talbot as the core, Mason Proffit was a pioneering country-rock band that was known for their high energy live shows. They released their first album, Wanted, in 1969, which featured their best-known song, the iconic protest anthem, 'Two Hangmen'. They went on to release 4 more albums between 1970 and 1973, all of which were well-reviewed and highly regarded, but did not achieve commercial success. The band was considered very influential and one of the progenitors of country-rock as a viable music format. Many of the groups that followed cited Mason Proffit as an important influence, including The Eagles, who has readily acknowldged that their 'Hotel California' was modelled after Proffit's 'Two Hangmen'. Although now recognized as innovators of country-rock (along with The Byrds and The Flying Burrito Borothers), at the time Mason Proffit was known just a hard-working regional band (doing up to 300 shows a year) whose live shows featured a mix of folk, country, bluegrass, and hard-driving rock in a high energy and crowd-pleasing concoction. Another aspect of Mason Proffit was that they were not afraid to deal with controversial poltical and social issues in their music ('Two Hangmen', which deals with speaking out against injustice and tyranny in government, was banned from radio play by the FCC for being inflammatory). By 1973, the group disbanded, and Terry and John continued on as duo, The Talbot Brothers, featuring a more acoustic style and sound. Terry has remained active in music over the years, even today, releasing over 30 albums. Like many older bands that have found a new audience in today's music world, Terry Talbot and Mason Proffit have a band web site (masonproffit.com) containing info and albums available for download. The web site also features a free download of the original 'Two Hangmen', which I have also included here as a bonus track to the live show presented here. Unfortunately, I do not have any more information about this live show, which is a fine show from 1971 (although not that great a recording), but it is the only Mason Proffit show I have run across. This show is being presented, in part, to answer a request by tonyg, so I hope you enjoy the show, tony. And to everyone else, here is Mason Proffit.

Thanks for posting. Their first album cover hangs framed over my office desk. Listener's should sample their music over at Amazon.

Thanks! Their first album hangs framed over my office desk. Listeners should head over to Amazon and sample their music.

Excuse the comment clutter...
Wanted to let you know that we were zapped by The Man, but were back with a new home. If you could update/include us in your links, it would be greatly appreciated.

NEVER GET OUT OF THE BOAT (REDUX)
http://nevergetoutoftheboat-redux.blogspot.com/

All the best,
W

Glad to see you back, Willard. I was concerned we had lost you and your wonderful blog. I have updated my link to your new site. Thanks.

Thank you, thank you. I saw them twice in Milwaukee--once after their second album and then when they toured in support of Rockfish Crossing. They were absolutely incredible. Wish there were more recordings of them live.

Thanks for taking the time to re-upload this great show! I check in here every week and you always have some really hard-to-find stuff. Thanks again!